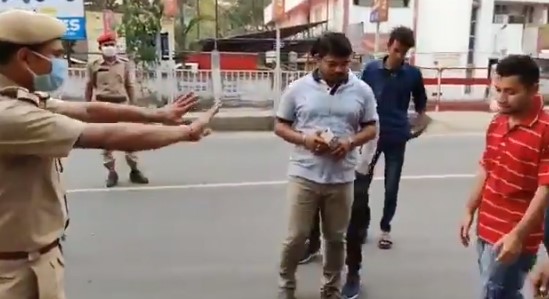 During the lockdown due to the novel coronavirus (COVID-19) breakout, the Assam Police till Monday has arrested 1174 persons for violating the norms and have seized 4763 vehicles.

Assam Police informed that as on April 6th, 2020, the police have recorded 946 incidents of norm violations during the ongoing lockdown and have registered 499 cases till 4 pm on Monday.

Apart from this, the total number of arrests made was 1174, vehicles seized were 4763 while 12 boats were also detained.

The police are on a strict vigil to track down the violators and strict actions are being taken against people who are seen roaming on roads without any valid reasons.

Assam Police is also using songs and drones to monitor the nationwide lockdown to the arrest the spread of novel coronavirus (COVID-19) in the state.

Drones have been deployed in various parts of Guwahati to monitor the movements of people and vehicles during the lockdown period.

Assam Police personnel are also taking the help of songs to encourage people to stay home and not violate the lockdown rules.

In a viral video, Guwahati Police personnel are seen singing a popular number ‘Dinor puhor rongsongiya’ from Assamese movie Aranya with their mobile phone torches on, and the beat of their batons knocking on the road.

Apart from this, the CRPF personnel were also seen singing in Guwahati urging people to stay indoors during coronavirus lockdown.

Assam Director General of Police (DGP) Bhaskarjyoti Mahanta earlier said that the state police is now applying new technology so that people who came in contacts with COVID-19 positive patients can be traced.

A special team has also been constructed and they will work with the health department.

The DGP further stated that the police have taken the matter of the contamination issue very seriously and the police are tracing everyone who might be connected with the virus issue.

He, speaking on the issue of fake news, said that the police have started a special drive against people spreading rumours or fake news.

Mahanta added that a few “anti-national elements” are using religion to disturb the social harmony and strict actions will be taken against violators.