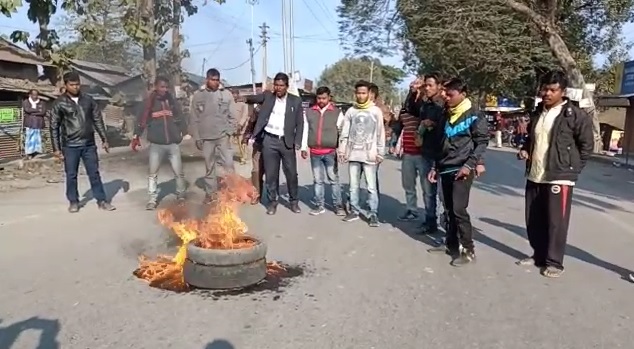 The Bandh jointly called by All Koch Rajbonshi Students Union (AKRSU), All BTC Minority Students’ Union and other organizations against the formation of Union Territory in Bodoland Territorial Council have hit normal life in Lower Assam.

The bandh has been backed by the AJYCP, All BTC Minority Students’ Union, Koch Rajbongshi Sanmilan, All Adivasi Students’ Association Of Assam.

“We are not against any community but the Bodo Accord should be made public so that the people are well aware of what are in the papers. What is so secretive about the agreement? Peace cannot be restored only with the NDFB but taking in confidence of the general mass” a protester said.

It may be mentioned that the Centre is all set to sign the Bodo Accord will the rebel group NDFB today at the national capital. The tripartite agreement will be signed in presence of the Union Home Minister Amit Shah, Chief Minister Sarbananda Sonowal other top leaders with the four factions of the NDFB.

The stakeholders of the Bodoland movement, including four NDFB factions, representatives of All Bodo Students’ Union and People’s Joint Action Committee for Boroland Movement are in Delhi for the fresh Bodo Accord.

This will be the third treaty to be signed with Bodo groups since 1993 after the memorandum of settlement(MoS) paved the way for Bodoland Autonomous Council followed by another MoS signed on February 10, 2003, between Assam government, Centre and the Bodo Liberation Tigers to form the present BTC. The BTC includes Kokrajhar, Chirang, Baksa and Udalguri districts.

Earlier Himanta Biswa Sarma had said the treaty does not include the formation of any new state or union territory.