I have a wish to set the Guinness World Record and for that, I need financial assistance. I hope Salman Bhai helps me: Bhupen Likson 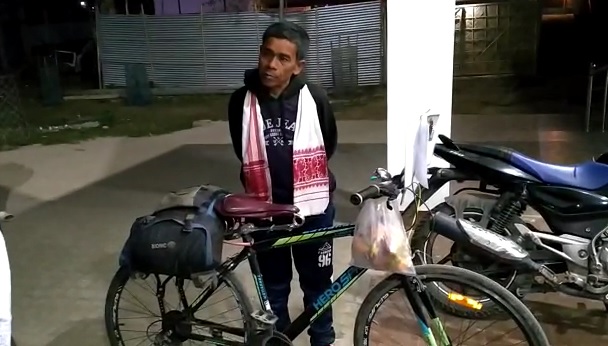 A 56-year-old cyclist from Upper Assam’s Tinsukia district has embarked on a journey to Guwahati to meet Bollywood heartthrob Salman Khan at the upcoming Filmfare Awards to be held in the city on February 15th, 2020.

Bhupen Likson originally hails from Margherita’s Jagun area and he left for his journey on February 8th, 2020 with a desire to meet his idol in Guwahati city.

Likson has already covered a distance of 500 km on his cycle and reached Dhing on Wednesday. From there he boasts of reaching Guwahati within 3 hours.

“I started the journey from my hometown on February 8th. From there I reached Dibrugarh and stayed overnight. I travelled past Sivasagar, Dergaon, Jakhalabandha and Dhing. From here will cycle all the way to Guwahati”. Lison said while speaking with the media.

Father to four children, Likson is not just a cyclist but also a crusader against rhino poaching and an activist. Donning Axomiya Gamusa across his neck he recently cycled to Guwahati to take part in anti-CAA protest to register his resentment against the “anti-Assam” law.

He holds both India and Asia record in cycling and now has a wish to set a Guinness World Record.

“I have a wish to set the Guinness World Record and for that, I need financial assistance. The government has extended their helping hand but it is not enough. I hope Salman Bhai helps me” he said.

Likson had earlier cycled to offer condolences to the families of the two Guwahati youths who were lynched to death by an unruly mob in Karbi Anglong in 2018.

Meanwhile, according to the latest development in the Filmfare Awards’ confirmed attendees list Salman Khan’s name is missing including other B-town biggies like Amitabh Bachchan and Shah Rukh Khan.

The current heartthrob of the tinsel town Vicky and celebrity film director Johar are likely to host the much-awaited 65th Filmfare Awards.