A lot of work has been done to establish peace in Northeast: Home Minister Shah 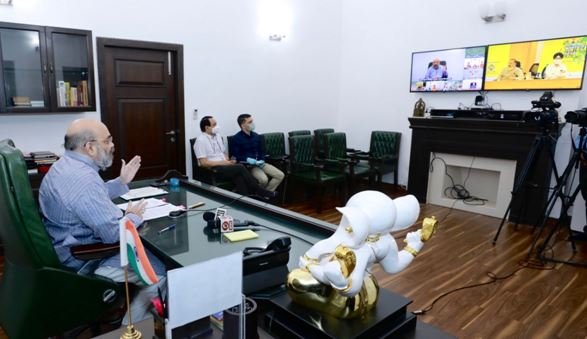 While inaugurating the ‘Destination Northeast – 2020’ through video conferencing on Saturday, Union Minister Shah said, “A lot of work has been done to establish peace in the Northeast under the leadership of Prime Minister Narendra Modi. The Land Border Agreement with Bangladesh, Manipur Blockade, Bodo Agreement and the surrender by 641 cadres of 8 militant groups are among the notable achievements of the Modi government”.

He stressed that peace in the North East is very important for economic development, promotion of tourism and employment generation. “The Northeast, which was once in the news due to terrorism, blockade, violence but now it is known for development, tourism, organic farming, industry and start-ups,” the Union Minister said.

Shah, who is also the Chairman of the North-East Council, said that the North East, rich in natural beauty, folk culture and art, is fully capable of becoming a major centre of world tourism. Shah said, “Under the leadership of Prime Minister Modi, the North East region will emerge as one of the favourite tourism and business destinations of India”.

He further said that the ‘Destination North East-2020′, which runs till 30 September, aims to introduce various cultures of the country to each other along with the tourist destinations of the North East and through this the whole of India will also get familiar with the vibrant and diverse culture of the North East.

“The beauty of the North East is unparalleled. Northeast is the jewel of India; without it the Indian culture is incomplete”, he said.

Destination North East is a calendar event of the Ministry of Development of North Eastern Region conceptualized with the objective of taking the North East Region to other parts of the country and bringing them closer together in order to strengthen national integration.

The construction work of the Assam’s longest flyover from Maligaon to Kamakhya has started from October 11.
Read more

Kaziranga National Park (KNP) has added a new member to its team as its departmental elephant Kunwari gave birth to a male calf on Saturday.
Read more

Para-gliding in Sikkim to take their wings from Nov 1

The 50-odd commercial para-gliders of the association are readying to take wings latest by November 1.
Read more

45 accused have been arrested in connection with the case, Assam (director General of Police) DGP Bhaskar Jyoti Mahanta revealed to the media on Saturday.
Read more

One after another name is coming into light in the Assam Police exam scam. One more accused has been arrested from Bongaigaon, Assam on wee hours of Saturday.
Read more