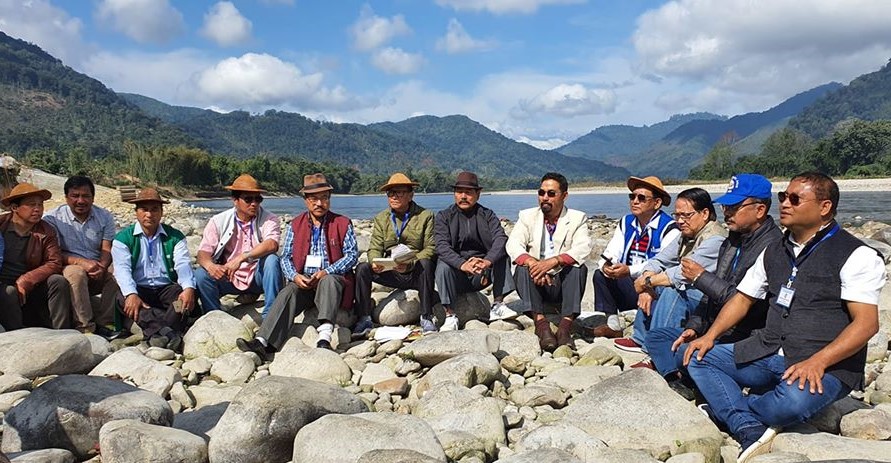 Aalo, the headquarter of West Siang district in Arunachal Pradesh is a very beautiful green hilly town on the bank of Siang river. The entire Arunachal Pradesh itself is greener than the rest of the country with more 82 per cent forest cover of its total landmass.

Kenbom Bagra (42) an advocate by profession and passionate environmental activist, is wholeheartedly working to stop the environmental degradation in Arunachal Pradesh, particularly in West Siang district.

Bagra was initially a lone warrior but he did a lot of work to unite the people of the Aalo town for the purpose.  In 2016, with a few of his like-minded friends, he established an organization – Aalo Town Public Welfare & Development Society (ATPWDS).

According to Bagra, who is currently spokesperson of ATPWDS, said that from the establishment of the organization, they had started a series of awareness campaign among the people of Aalo town and the nearby villages about the importance of forest, environment, biodiversity, ecosystem during the period of soaring global temperature.

Now in collaboration with the West Siang district administration, the ATPWDS is seeking ban on fishing in rivers and poaching wildlife. “Excessive fishing with fish catching materials like fishing gill net, arrows, chemical blasting, poisoning rivers etc in the Siang river and its tributaries -Sip, Hirik, Tarsu and Himi and Yamgo, is the reason behind the drastic decline of fishes including the endangered species; poaching wild animals including some schedule I animals in the Wildlife (Protection) Act- 1972, rampant in Arunachal Pradesh,” Bagra told.

He added from the first April next, fishing and local fish-selling in the market would be totally banned. But traditional fishing practices such as angling would be excluded as these practices have been continuing since time immemorial.

Kento Ete, the chairman of the ATPWDS and former minister informed that with the district administration of West Siang they organised several awareness meetings in villages – Bene, Kabu, Kamba etc from Pessing to Panging.

He told that so far at least 25 awareness meetings had been organised in the riverine villages of West Siang district. He added unaware people of Arunachal Pradesh had been indiscriminately hunting wild animals like wild boars, deer, birds etc.

Bagra said, “If anyone violates any law relating to forest and environment, the case will be lodged against him duly.”

Speaking on gun licenses, he told a Public Interest Litigation (PIL) would be filed to ban gun licenses as these arms had been using in poaching wildlife illegally and unethically. Bagra also wants to draw the attention of the state’s dynamic Chief Minister Pema Khandu on the environmental issues of the state and appeals his cooperation so that they can achieve the vision of the people of Arunachal Pradesh.