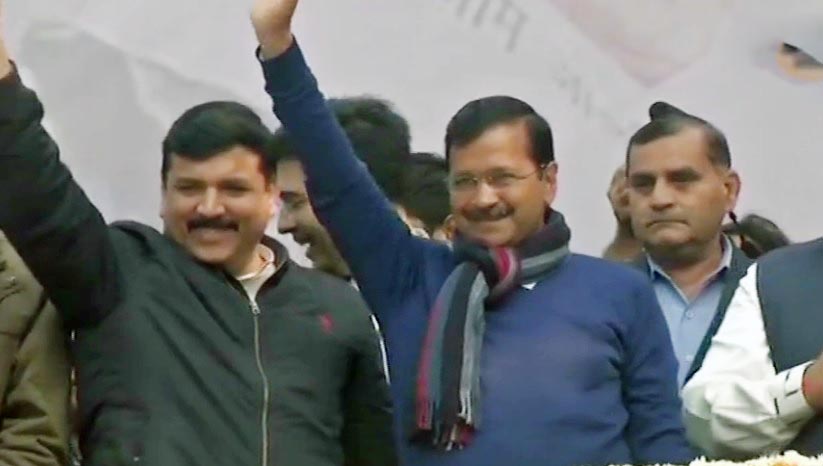 The Aam Aadmi Party (AAP) thumped victory once again in the Delhi Assembly elections. The results of the elections were declared on February 11th, 2020. Arvind Kejriwal is all set to become the Chief Minister for the third time.

Addressing the party workers, Kejriwal thanked the people of Delhi for supporting him and giving a mandate for the third time. “Dilli walon ghazab kar diya aap logon ne! I love you,” Kejriwal said.

Besides, he said, “This is the beginning of a new kind of politics. This is a new sign.” He greeted the party workers for the victory.

Meanwhile, congratulatory messages have started coming in as AAP looks all set to form the government in the national capital.

Congratulating Kejriwal, Maharashtra Chief Minister Uddhav Thackeray said, “I congratulate Arvind Kejriwal and the people of Delhi for AAP’s victory in Delhi Polls 2020. People have shown that the country will be run by ‘Jan Ki Baat’, not ‘Mann Ki Baat’. BJP called Kejriwal a terrorist but couldn’t defeat him.”

Meanwhile, Rashtriya Janata Dal (RJD) leader Tejashwi Yadav, while congratulating Kejriwal, said, “The mandate given by the people of Delhi has shown that they will vote on work and development.”

Delhi BJP chief Manoj Tiwari, while accepting the party’s defeat, said, “We couldn’t perform well. We’ll evaluate this. Sometimes we get discouraged when results are not as per our expectations but I would like to tell our workers to not be disheartened.”