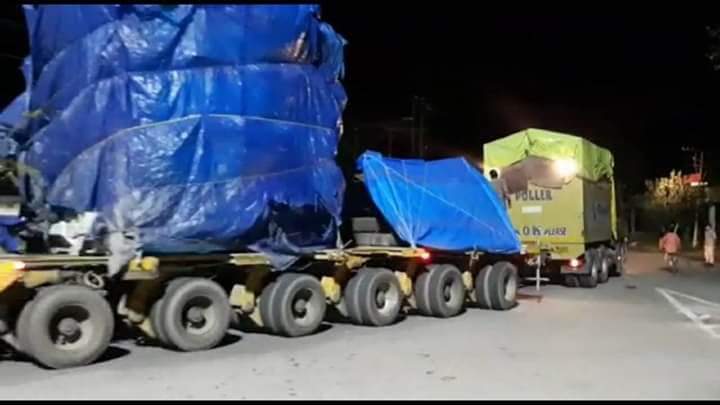 Guwahati: The Lakhimpur district units of the All Assam Students Union (AASU), Asom Jatiyatabadi Yuba Chatra Parishad and other indigenous organisations of the state on Tuesday morning blocked two multi-axle trucks at Kohiarbari, near Chauldhua area under Lakhimpur district that carried heavy equipments for the Subansiri Lower Hydroelectric Power Project of the NHPC.

Lakhimpur district AASU general secretary Dhanmani Dutta said, “We have blocked two multi-axle trucks that were carrying heavy pieces of machinery for the NHPC’s Gerukamukh dam project this morning. Such furtive act of the BJP-led Centre, as well as the state government, shows how they are unmindful to the democratic protests and careless for the downstream impact. We condemn such an act.”

The 2,000MW Lower Subansiri hydroelectric power project (LSHEP) is located on Subansiri River, which is on the border of Arunachal Pradesh and Assam. The project, being developed by the state-run National Hydro Power Corporation (NHPC), has been a matter of debate and dispute since years.

The AASU leader said, “The state government has conspired to confine the people of Assam inside a home in the name of fighting against the pandemic coronavirus. However, taking full advantage of the lockdown and curfew imposed in the state, the state government has been pushing the heavy types of machinery required for the NHPC project to quicker the completion. We strongly slam Dispur for such unmindful and covered act.”

Lakhimpur district Deputy Commissioner Jeevan B said, “We are dealing with the situation. We will resolve and come out with a solution shortly.”

According to the AASU, the vehicles reached the spot at around 7:30 this morning.