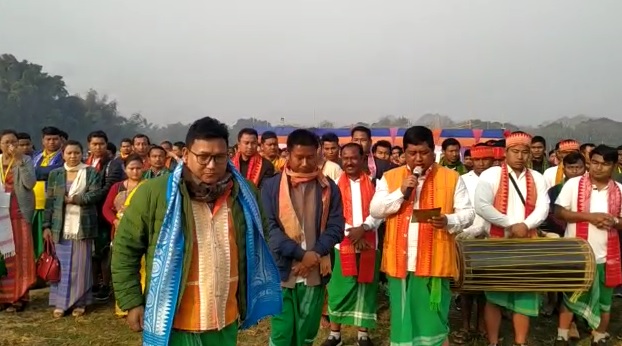 All Bodo Students’ Union(ABSU), key signatories of the Bodo Peace Accord adopted a series of resolutions at the 2-day special convention held at Tamulpur. The students’ body resolved to appeal to the government for time bound action plan, for the overall development of the Bodos and other communities.

The tripartite agreement was signed by Union Home Minister Amit Shah, Assam Chief Minister Sarbananda Sonowal, the top leadership of the four factions of the NDFB and the Centre on January 27th, 2020.

The ABSU which has been spearheading the statehood movement expressed gratitude for the MoS and resolved to appeal to the government to implement every clause of the accord as early as possible with a time-bound action plan.

Welcoming the BTR accord, the ABSU also said that it will indefinitely suspend all forms of Bodoland movement and other forms of agitations and instead focus on social upliftment.

They appealed the government to immediately implement clause 9.2 and 9.4 of the BTR Accord which seeks to provide rehabilitation to all the members of the NDFB and withdraw the criminal cases registered against the NDFB factions.

ABSU in their resolution mentioned that they would appeal to the government to take up steps to bring home all the NDFB members, civilians from the custody in foreign countries and withdraw their cases altogether.

They informed that they have relieved Pramod Boro as ABSU president and inducted Dipen Boro as the new president till next conference to be held in 2021. Vice President Romeo P Narzary and Secretary Manto Boro have also been relieved from their respective charges. Now Jayanta Basumatary is the new VP from the speaker and Sunilal Basumatary is the VP till next conference.