AASU is a threat to the Assamese community: ABVP 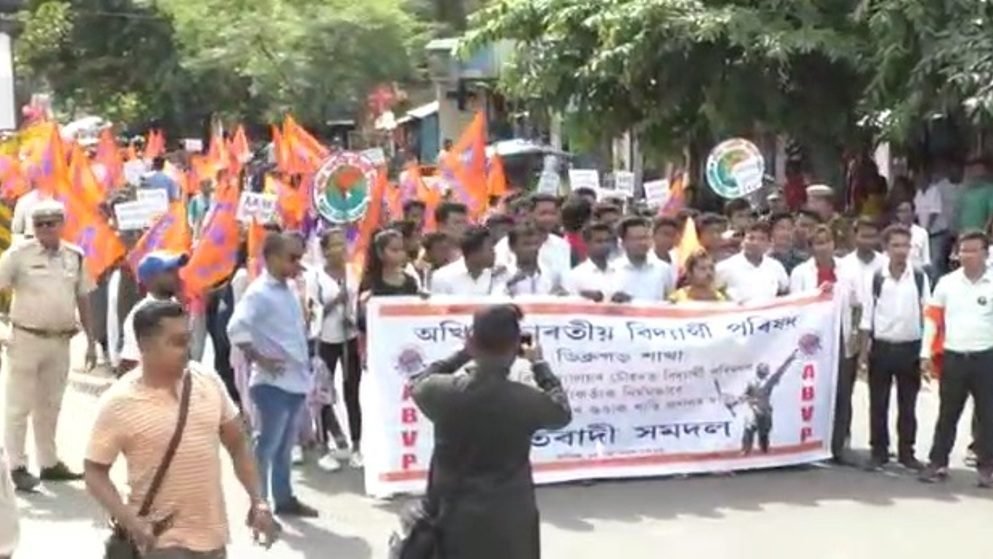 Hundreds of Akhil Bharatiya Vidyarthi Parishad(ABVP) protesters took to the streets of Dibrugarh district and launched a massive agitation against ‘hooliganism’ of All Assam Students Union(AASU) on September 14th, 2019.

Holding placards, the protesters of the right-wing of all India student organisation shouted slogans like “Joi Aai Axom”, “ABVP Long Live”, “Stop Hooliganism of AASU” which echoed in the streets of the town area today.

It may be mentioned that a scuffle broke out between the ABVP and AASU members over the upcoming Post Graduate Students’ Union (PGSU) elections yesterday. The agitators also alleged that on September 9th, 2019 a group of AASU members attacked former state secretary Nayan Jyoti Sharma and Rohit Baruah near Dibrugarh University’s, Jyoti Batsora leaving the duo critically injured.

“We deeply condemn the violent attacks on ABVP’s former state secretary Nayan Jyoti Sharma and Rohit Baruah by the hooligans of AASU leaving them seriously injured. It was an attempt to murder,” said an irked ABVP member.

“Through this incident, the AASU should not think that we are weak but are well educated and we can as well use our power. The AASU might be involved in hooliganism but we will retaliate through the law,” said another ABVP member.

The students body also claimed that AASU is a threat to the Assamese community.