Mancha executive president Advocate Hemen Bora said, “It is an open secret that all the opposition political parties lack extraordinary leaders. Lacking a capable chief ministerial candidate will help the BJP retaining power for the second term in Assam." 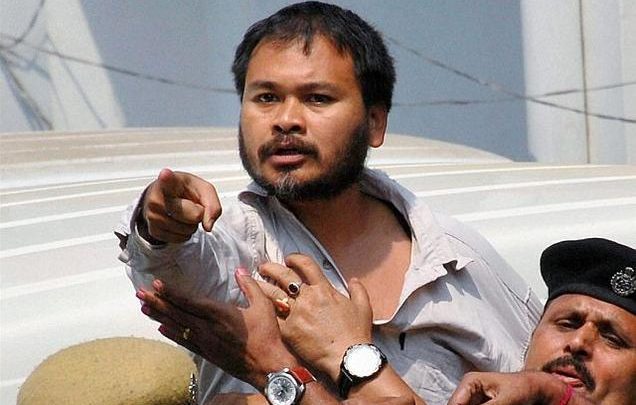 GUWAHATI: As Assam facing its next state polls in 2021, Assam’s anti-Citizenship Amendment Act (CAA) leader Akhil Gogoi’s name has been tossed by many as the next prospective chief minister of the state. The peasant leader, who has been continuing to be behind the bars since December last year, has been proposed by the Sanmilito Nagarik Mancha, a citizen body, on Tuesday as the common candidate from all the Opposition parties.

Mancha executive president Advocate Hemen Bora said, “It is an open secret that all the opposition political parties lack extraordinary leaders. Lacking a capable chief ministerial candidate will help the BJP retaining power for the second term in Assam. Therefore, in view of the ensuing assembly elections, we appeal all the opposition political parties of the state to name peasant leader Gogoi as their unanimous CM candidate to take on the ruling BJP.”

Categorically appealing the Assam Pradesh Congress Committee (APCC), Bora said, “If the Congress truly opposes the CAA and commits to safeguard the cause of the people of Assam, they (Congress) should sacrifice and project Akhil Gogoi as the oppositions’ common chief ministerial candidate.”

The working president of the citizens’ body also urged all the anti-CAA forces; both political parties and various indigenous organisations and students’ bodies of the state to come under one umbrella to defeat the BJP in 2021 assembly elections.

“The Congress, All India United Democratic Front, Anchalik Gana Morcha, Asom Songrami Mancha, Krishak Mukti Sangram Samiti, Asom Jatiyatabadi Yuba Chatra Parishad, All Assam Students’ Union and other anti-CAA forces must come under one platform to defeat the BJP. We must remember, more divisions will strengthen the saffron,” he said.

The Krishak Mukti Sangram Samiti has intensified the fundraising drive across the state to gather the amount required for hiring two senior Supreme Court lawyers. Recently, the KMSS announced that it will move the Gauhati High Court hiring two senior legal experts from the apex Court to step up the legal battle for releasing its leader Akhil Gogoi.

Inspector general of prisons, Assam Dasarath Das on Tuesday informed Time8 that prominent anti-CAA leader and KMSS chief Akhil Gogoi has recovered from Covid-19. However, according to Das, the peasant leader was still undergoing treatment for skin disease at the Gauhati Medical College and Hospital (GMCH).