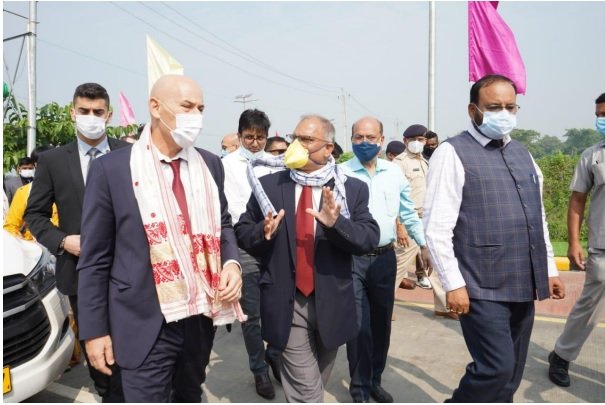 GUWAHATI: Ambassador of Israel to India Dr. Ron Malka, led a delegation to the Tech City, which is a 100 acres IT & Electronics facility set up near Lokopriya Gopinath Bordoloi International Airport, on Wednesday.

Tech City is in the process of development as a one-of-a-kind IT and Electronics Hub in the city of Guwahati and presently a large number of national and global entrepreneurs have shown their keen interest in setting up various manufacturing facilities and educational and training setups in the park.

During the visit, the ambassador expressed that, he along with the entire delegation were pleased to visit the set up and was extremely impressed with the vision on which the entire Tech City facility is being developed.

He also requested the Department of Information Technology and AMTRON to plan a visit shortly to Israel for exploring the emerging technologies available therein. Further to that, he also stated that the Israel government would be happy to provide all the necessary support for any possible collaborations and technology sourcing for establishing manufacturing facility set ups and R&D institutions in the State of Assam with potential investors of Israel.

State’s Minister of Information Technology & Water Resources, Keshab Mahanta also had an exclusive discussion with all the delegates and projected the viable environment, both political and social in the state.

With times to come, Tech City is expected to boost the IT industry of the State and bring in employment opportunities for the youths of the state.