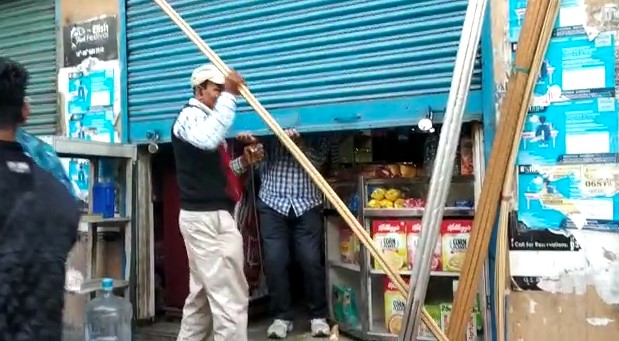 Panic and fear gripped the traders along the GS Road in Guwahati on December 11th, 2019 as agitators took out rallies opposing the controversial Citizenship (Amendment) Bill, 2019.

As the debate is going on in Rajya Sabha over the Bill, scores of students of city colleges like Handique College, Cotton University, activities of students’ bodies and civil organisation hit the streets to protest against the Bill. The protesting students broke the barricade at ABC point and clashed with the police.

The security personnel had to resort to lathi-charge and tear gas shelling to disperse the crowd. Anticipating untoward situation, the jittery shopkeepers were seen pulling down shutters within a matter of minutes and rushing to the safety of their homes.

A trail of violence was reported in Guwahati during the 11-hour bandh on December 10th, 2019. The protestors in Guwahati had set up a blockade and burnt tyres to protest against the controversial Bill throwing normal life out of gear.

Protestors also vandalised, torched vehicles, pelted stones at cars, buses in several places including Guwahati. Many cars were stopped midway by the protestors and were forced to return back.

Meanwhile, security deployments have been increased in many places including Guwahati following the violent protests.