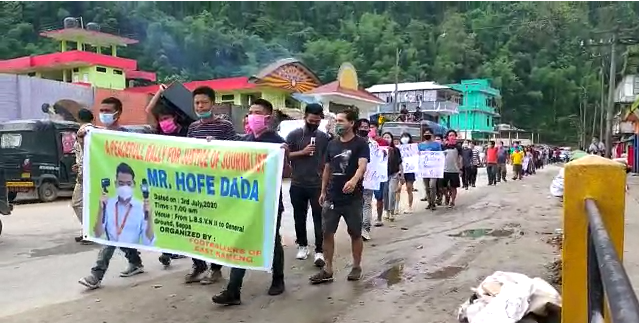 Dada was allegedly manhandled by a few workers of the SMS Smelter Limited, located near the state’s twin capital city, Naharlagun, while reporting live from outside the factory premises on June 29.

Members of the district football fraternity said, “No media reports are compiled for individual interests. The air and noise pollution created by the SMS Smelter factory has been a concern for the surrounding residents since years. Dada tried to highlight the issue. The unprecedented assault to thwart Dada from reporting was not fair.”

Demanding immediate justice for Dada, the footballers said, “Delayed justice will motivate the miscreants to suppress the journalists of the state. We also demand the state government to shift the SMS Smelter factory to an alternative non-residential area.”

Arunachal Pradesh police on June 30 arrested a 34-year-old man, identified as Nangram Tapu, who worked as security officer-cum-vigilance officer in the SMS Smelter Factory, in connection with the assault case.

However, Dada alleged, “The accused got bail hours after he was arrested on June 30.”