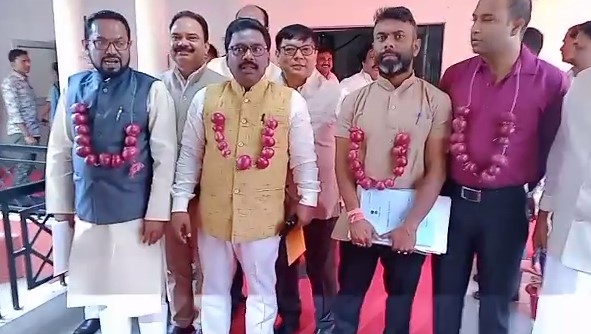 As onion prices touched Rs 100 a kg in some parts of the country, the Assam Congress leaders turned up in the Assembly wearing a garland of onion bulbs on November 29th, 2019.

The opposition leaders also raised slogans and attacked the Bharatiya Janata Party-led government for its “empty promises” of “achhe din” on the second day of the winter session of the Assam Assembly.

The Congress leaders accused the Narendra Modi government at the Centre for the soaring prices of onion in the country. The MLAs said that Modi has completely lost its grip on commodity price control regime.

Wholesale onion prices have shot up to Rs 100/kg for the first time in the history of the country. This is the second time onion prices increased after the government had earlier imposed a stock limit on traders to stabilise rising rates in October 2019.

The first day of the Winter session of the Assam Assembly on November 28th, 2019 started on a stormy note as Opposition – Congress and AIUDF – protested and walked out over the Citizenship (Amendment) Bill and National Register of Citizens (NRC). The MLAs of both the parties demanded the cancellation of the question hour and asked for a discussion to be held on the CAB and NRC issues.