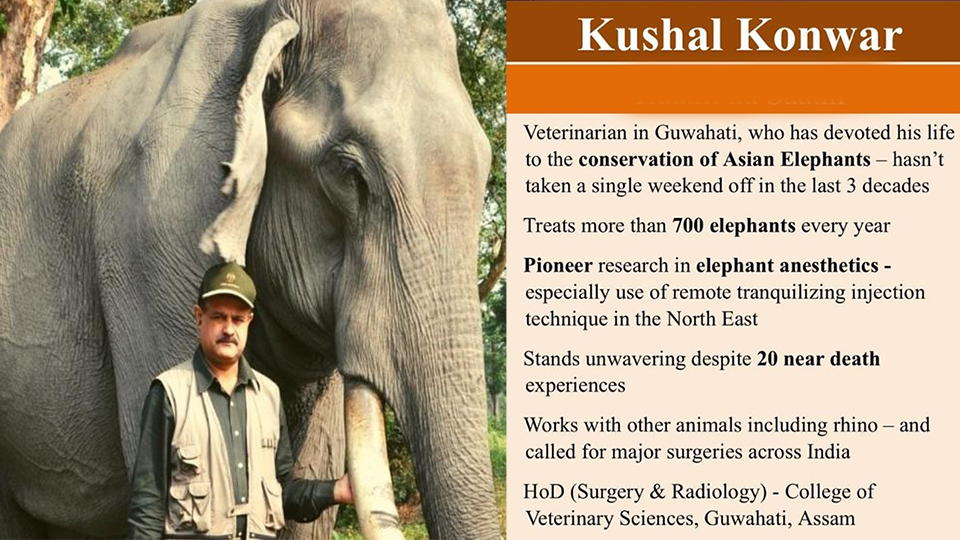 Sarma, who is the professor and head of the Department of Surgery and Radiology of the College of Veterinary Science at Khanapara in Guwahati, has tamed 139 rogue tuskers and treats at least 700 elephants on an average every year.

Sarma became a veterinary doctor in 1983 and in 1994, he specialised in anaesthesia in elephants.

His affinity towards the elephants can be traced to his childhood as he spent the days with an elephant at home. His grandmother had an elephant called Lakshmi.

At a time when the man-elephant conflict has become a major concern globally, Dr Sarma’s contribution to relocating wild elephants into their jungles and treating the ill elephants is remarkable. He was the first person in Assam to have used tranquillizing darts to subdue ‘musth’ elephants — not only helping save the elephant but people in surrounding villages too.

Sarma, who has survived 20 near-death attacks by rogue jumbos, is the pioneer of the remote tranquilising injection technique in the Northeast.

The Asian elephant, also called the Asiatic elephant, is the only living species of the genus Elephas and is distributed throughout the Indian subcontinent and Southeast Asia, from India in the west, Nepal in the north, Sumatra in the south, and to Borneo in the east.

Since 1986, the Asian elephant has been listed as Endangered on the International Union for Conservation of Nature (IUCN) Red List, as the population has declined by at least 50 per cent over the last three generations, estimated to be 60–75 years.

It is primarily threatened by loss of habitat, habitat degradation, fragmentation and poaching. In 2003, the wild population was estimated at between 41,410 and 52,345 individuals.

The largest bull elephant ever recorded was shot by the Maharajah of Susang in the Garo Hills of Assam in 1924. It weighed 7 tons, stood 11.3 ft height at the shoulder and 26.4 ft length from head to tail.