Assam flood: No sign of decline on death toll; reaches 93 till Thursday

Accordingly, with 26 deaths due to land slide this year, the deaths due to floods and landslides altogether went up to 119 this season so far. 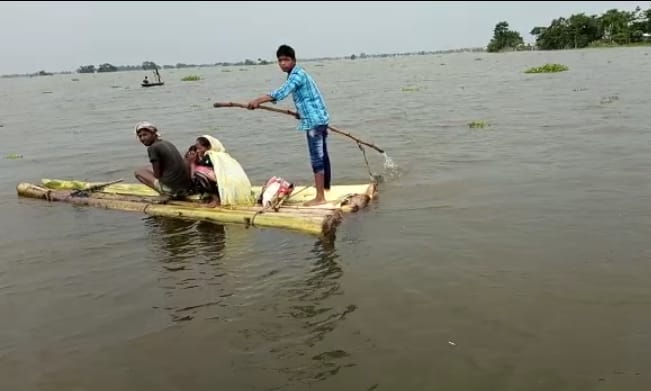 GUWAHATI: The state of Assam on Thursday witnessed another four deaths due to the severe flooding. Hence, with four more deaths recorded on Thursday – one at Bongaigaon, one at Kokrajhar, one at Morigaon and another at Golaghat, Assam has lost 93 human lives altogether in the floods till July 23.

Accordingly, with 26 deaths due to land slide this year, the deaths due to floods and landslides altogether went up to 119 this season so far.

The overall flood situation remained unchanged and worrisome on Thursday as the number of affected districts remained 26 since the previous day while the number of villages affected has gone higher.

As per Central Water Commission report issued on Thursday morning, the river Brahmaputra was still flowing above danger level at Dibrugarh, Neemaitghat near Jorhat, Tezpur, Goalpara, Dhubri, Dhansiri near Numaligarh, Jia Bharali near Sonitpur, Kopili in Nagaon, Beki in Barpeta, Kushiyara at Karimganj and Sankosh at Golakganj.

Notably, the regional meteorological centre Guwahati predicted widespread rainfall over North-Eastern India which is likely to have an impact on the overall flood scenario here in the coming a few days.