Interacting with the flood-affected people of the area in presence of the district administration, Sonowal said, “We are constantly monitoring the on-ground situation and steps are being taken to prevent further damage.” 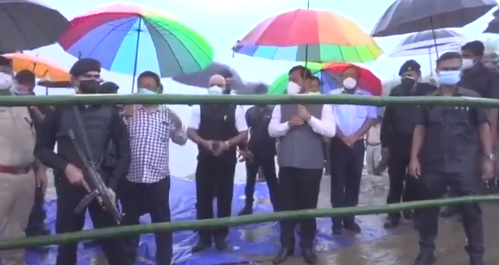 GUWAHATI:  Assam chief minister Sarbananda Sonowal on Wednesday morning said that steps are being taken to prevent further flood damages in the state.

Sonowal said this while inspecting the erosion caused by Subansiri river at Hekeran in upper Assam’s Lakhimpur district along with Minister for Panchayat and Rural Development, Water Resource Minister Keshab Mahanta and local MP Pradan Baruah.

Interacting with the flood-affected people of the area in presence of the district administration, Sonowal said, “We are constantly monitoring the on-ground situation and steps are being taken to prevent further damage.”

The chief minister also asserted that the state government will speed up the distribution of relief materials. “We will also accelerate the rehabilitation process,” he added.

Recently, the chief minister also visited the districts of Barpeta, Nalbari, Darrang, Dhemaji, Biswanath and the Kaziranga national park and took stock of the flood situation.

So far, Assam has lost 104 human lives in the devastating flood till July 28. The catastrophe has affected more at least 26 districts of the state affecting more than 22,33,920 population.