Assam Goes Up In Flames, Indefinite Curfew Clamped In Guwahati

Two columns, each column has 70 personnel, of the army, have been deployed in Guwahati 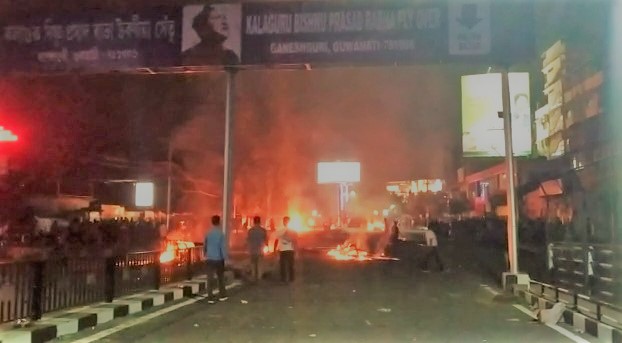 No organization had called for a strike on December 11th, 2019 but the streets of Assam turned into a battleground with massive and violent protests against the Citizenship (Amendment) Bill, 2019.

In Guwahati, tens of thousands of students took to the streets, broke police barricades, and lit bonfires on the roads in protest against the Bill, prompting the administration to deploy the army in the evening hours. Police used water cannons, fired teargas shells and baton-charged protesters, who fought back.

By late evening hours, Guwahati resembled a war zone similar to the days of the Assam Agitation. The sight and sound were unseen since the violent 6-year movement by students that ended with the signing of the Assam Accord in 1985.

The situation was turning uncontrollable as protesters started pouring in from all sides towards the Janata Bhawan, Dispur Last Gate.

The entire stretch of the GS Road witnessed a ‘war-like’ situation as thousands of seething students of various educational institutes of Guwahati took to the streets and assembled in front of the Janata Bhawan as part of their ‘Dispur Chalo’ rally. The students were joined by people from various localities of the city as they marched ahead towards the secretariat.

Roads were blocked, traders closed their shops, and vehicles went off the road as ‘Aahoi-aah, ulai aah (Come one, come all), ‘Joi Aai Axom (Hail Mother Assam)’, the iconic anthem of the Assam Agitation, rent the air.

The protest continued late into the night, disrupting traffic massively across the city. Public and private vehicles moving in and out of the city were stranded for several hours.

At 6:15 pm, curfew was imposed for an indefinite period in Guwahati. At 7 pm, mobile Internet services of all carriers across 10 of the 33 districts in Assam were suspended for 24 hours – Lakhimpur, Dhemaji, Tinsukia, Dibrugarh, Charaideo, Sivasagar, Jorhat, Golaghat, Kamrup (metro) and Kamrup.

Two columns, each column has 70 personnel, of the army, have been deployed in Guwahati.  Another column has been kept on standby in the Bongaigaon district.  Police and CRPF personnel are patrolling the streets of Guwahati.

Meanwhile, security deployments have increased in many places including Guwahati following the violent protests.  Commando Battalions have also been deployed with fire tenders. Siren of ambulances kept blaring throughout the night.

As protest intensified, curfew was imposed in Dibrugarh on the night of December 11th, 2019 and will be in force till further orders. The Army has also been deployed in Tinsukia and Dibrugarh districts.

The Rajya Sabha on December 11th, 2019 approved the Bill, completing the legislative procedure for giving Indian citizenship to non-Muslim migrants from Pakistan, Afghanistan, and Bangladesh.

The agitators said that the Bill, which proposes to give citizenship to Hindus, Christians, Parsis, Jains, Buddhists, and Sikhs facing religious persecution in Pakistan, Bangladesh, and Afghanistan, is against the spirit of secularism and violate the Assam Accord.