It may be noted that as the Governor Prof. Jagdish Mukhi took over the administration after the expiry of the term of the BTC on April 27 this year, he has taken a proactive role in spearheading the socio-economic development of the BTAD. 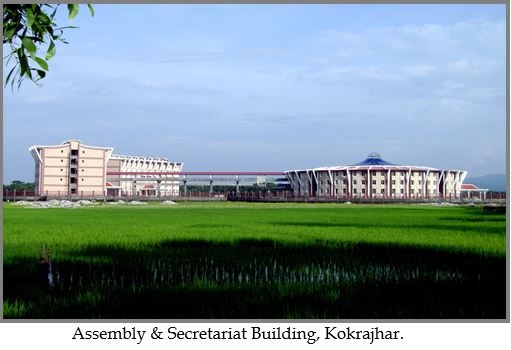 Guwahati: Though the COVID 19 pandemic has had its cascading affect on all fronts, the Governor’s reiteration to continue development activities amid this health emergency have yielded fruits in all the districts of Bodoland Territorial Area districts with the key indicators showing positive growth.

It may be noted that as the Governor Prof. Jagdish Mukhi took over the administration after the expiry of the term of the BTC on April 27 this year, he has taken a proactive role in spearheading the socio-economic development of the BTAD.  Since the ongoing COVID 19 pandemic has hit the state hard with the perpetual lockdowns have slowed down the rate of economic activities, Prof. Mukhi asked the Administrator, BTC Rajesh Prasad and the Principal Secretary, BTC Dr. Siddharth Singh to draw a roadmap for the sustenance of economic activities in the BTAD.

During the COVID 19 pandemic and its resultant lockdown, a total of 18766 migrant labourers returned to the four districts of the BTAD and out of them 10760 workers applied for job cards. Consequent upon their application 10538 people were given new job cards or engaged in existing job cards. Though 1772 number of people showed their reluctance to receive job cards, 97.5 percent of people who had applied for job cards were given the same under MGNREGA schemes for a self-reliant state.

It may also be noted that as the terms of the Village Council Development Committees (VCDCs) which are coterminous and cease to exist with the expiry of the term of the Council, got automatically dissolved.  It may further be noted that the Governor had received several complaints regarding the misappropriation of the job cards issued under MGNREGA and had asked the Administrator to designate the respective BDOs to take care of people’s welfare like handling of job cards that were primarily looked after by the VCDCs before their dissolution. The Governor even changing the erstwhile practices of keeping the Job Cards with VCDCs, asked the Administrator to get hold of all the Job Cards from the VCDC functionaries and hand them over to the beneficiaries. This had helped the job card holders to enjoy the benefits of MGNREGA scheme without having been trapped in the hands of the middle man.

Moreover, in the areas of housing, BTAD since April 2020, has shown remarkable progress in the implementation of Prime Minister Awas Yojana (PMAY-Gramin) scheme. During the period starting from 27th April, 6382 houses were completed. Besides 171 houses were also built in the tea garden areas which led to extending the right to dignity of living to even the remotest part of the Council. The Panchayati Raj and Rural Development in the Council is also working resolutely towards poverty alleviation and becoming a ray of hope for the rural people who were badly hit by the COVID 19 pandemic.