On the occasion of International Breast Cancer month, Health City Hospital in Guwahati organised a bike rally to raise awareness against Breast Cancer on Sunday. 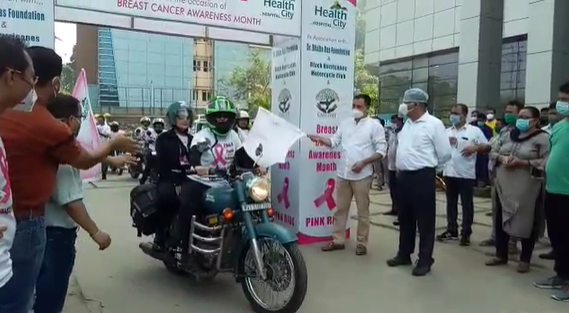 Guwahati: On the occasion of International Breast Cancer month, Health City Hospital in Guwahati organised a bike rally to raise awareness against Breast Cancer on Sunday.

Pegu said that the disease can be cured if the symptoms could be diagnosed in the initial stage. He also spoke on more awareness on breast cancer and as to how early screening of the disease helps its diagnosis.

Appreciating the bike rally conducted by the city hospital, Pegu on the other hand condemned the fact that the percent of Breast cancer patients are increasing in the state.

Marking the importance of the month, managing director of Health City Hospital, Dr Bhabananada Das said that to strengthen the willpower of the women suffering from the disease, this awareness programme is conducted every year on the month of October.

He also added that due to lack of awareness among the people of India, 50% of the cases are diagnosed at late stage.

The cancer care centre of the Health City Hospital has taken up the initiative to raise awareness against this disease which could be deadly if not cured in time.