The ‘grand old party’ has made no announcement to field a candidate for the Titabor constituency, which is the traditional seat of former Assam Chief Minister and late Congress leader Tarun Gogoi. 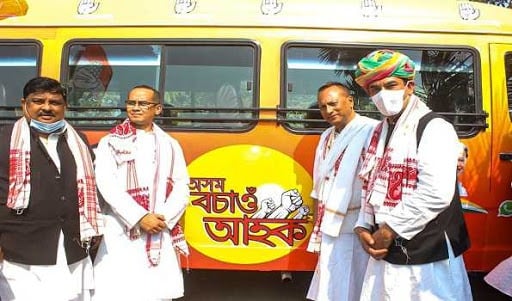 Guwahati: The Congress party on Saturday has announced the names of its candidates for 40 seats in the first of the three-phased election. The party has allowed all its MLAs to recontest in the Upper Assam region, which will vote on March 27.

The list comes a day after the ruling Bharatiya Janata Party (BJP) released its first list of 70 candidates.

Golaghat Bitupan Saikia, who left the BJP and joined Congress, will fight from Golaghat. In the same seat, former Congress minister Ajanta Neog, who joined BJP, has been given ticket by the BJP.

Rajib Lochan Pegu will contest from Majuli (ST) seat. Rana Goswami will fight the election from Jorhat. The other key seats in this list are Tezpur, from where Anuj Kumar Mech will contest; Dibrugarh, from where Rajkumar Nilanetra Neog will contest, and Digboi, from where Sibanath Chetia will fight.

The ‘grand old party’ has made no announcement to field a candidate for the Titabor constituency, which is the traditional seat of former Assam Chief Minister and late Congress leader Tarun Gogoi.

Earlier in the day, reports of increasing differences between Congress leaders over seat-sharing with allies and ticket distribution gained momentum as the Congress’s women wing chief, Sushmita Dev, walked out of a party meeting on selection of candidates in Guwahati on Saturday.

The party and Dev, however, dismissed the reports. “I love the party and madam (Sonia Gandhi),” Dev said.

The Congress is looking to claw back to power amid a formidable challenge thrown by the ruling BJP, which has used Prime Minister Narendra Modi in its election campaign.

The Congress-led “mahajoth” or grand alliance has AIUDF, BPF, CPI(M), CPI, CPI(ML) and the Anchalik Gana Morcha as its allies. The Congress is engaged in hectic talks with its partners and also within the party over seat-sharing.