On Wednesday, Silchar Youth Congress burnt effigy of chief minister Yogi Adityanath in protest against the gang-rape and demanded Presidential rule in the state 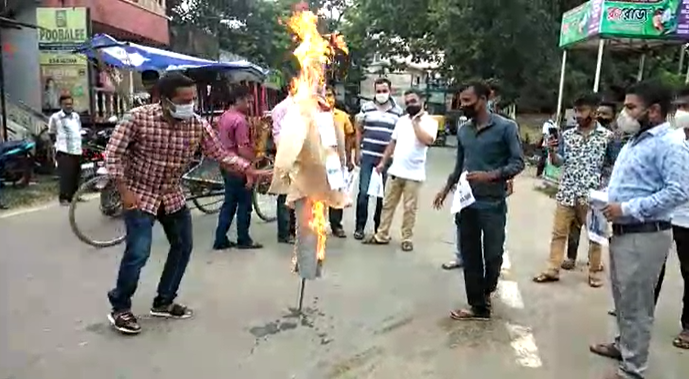 Protests have erupted in India over the death of a young woman two weeks after she was dragged from a field and allegedly gang raped and tortured.

The 19-year-old was attacked while she was out cutting grass on September 14 in Hathras, a district in the state of Uttar Pradesh.

On Wednesday, Silchar Youth Congress burnt effigy of chief minister Yogi Adityanath in protest against the gang-rape and demanded Presidential rule in the state.

The protesters alleged that the Yogi Adityanath-led government is to be held responsible for the horrific gang-rape.

The protest was conducted in Silchar park road where workers from the party joined to demand justice to the deceased victim.

The woman was found by her family naked, bleeding and paralysed, her tongue split and her spine broken. She was taken to hospital in the city of Aligarh and this week she was transferred to a facility in Delhi, where she dies from her injuries on Tuesday morning.

The woman was a Dalit, meaning she was from the lowest Indian caste. The suspects lived next door to her family and were from a higher caste.

The woman’s family has alleged that their lower social status meant the police initially did not take the case seriously until it gained traction in the media. Hathras police in UP have denied their response was slow.

The Prime Minister also paid his tribute to the sacrifice of Joymoti, the Ahom princess who sacrificed her life for her husband Gadapani, in the Jeranga Pathar.
Read more