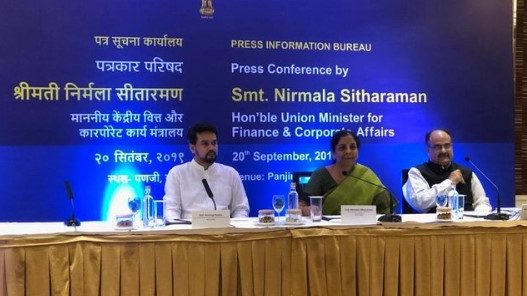 In the face of economic slowdown, bringing cheers to the manufacturers and investors, the Government on September 20th, 2019 slashed corporate tax rates to 22 per cent for domestic companies and 15 per cent for new domestic manufacturing companies. Amid criticism from all square, Union Finance Minister Nirmala Sitharaman also announced a slew of other fiscal reliefs.

Sensex surges over 2,000 points, industry and experts cheered after the Government slashed the corporate tax rate, three months after the announcement of Budget 2019-20. The market experts opined that the decision of the Government will allow the local companies to compete with lower tax jurisdictions like the United States of America. The new tax rate will be applicable from the current fiscal which began from April 1st, 2019.

The move of the Government has also been welcomed by Assam Finance Minister Himanta Biswa Sarma who said that it will boost employment generation activity in the country.

The big bang reforms are expected to push economic growth and investments in the country at a time when the automobile sector is facing a severe crisis. The small and medium-sized companies in the manufacturing sector will greatly gain from the slashed new corporate tax rate. The move is expected to yield better revenue generation.

At a time when India’s gross domestic product growth slowed for the fifth consecutive quarter in April-June 2019 to five per cent, the lowest in six years, the move by the Government is expected to fuel investments, boost employment in the country. However, the Government is yet to comment on the impact the concessions will have on the fiscal deficit target.

Though the announcement has triggered the much-needed change in the mood ahead of Diwali, it will be interesting to watch how the slashed rates boost Make in India initiative.