A 16-year-old boy was brought to the emergency reception with complaints of headache, nausea and vomiting and fever since one month. Three months ago he had an accident while trying out a firearm he had designed 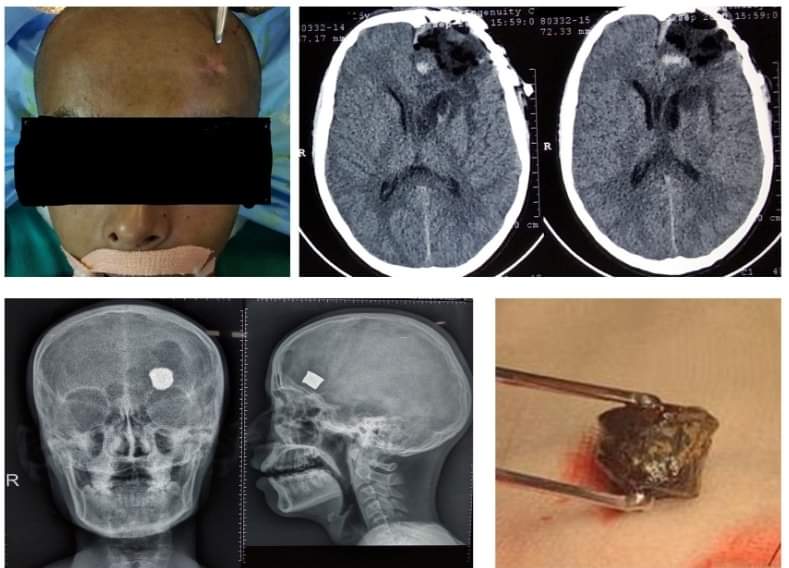 Gangtok: A uniquely interesting case was successfully treated by the Department of Neurosurgery in Central Referral Hospital (CRH) in Sikkim recently.

A 16-year-old boy was brought to the emergency reception with complaints of headache, nausea and vomiting and fever since one month. Three months ago he had an accident while trying out a firearm he had designed.

After watching a few online videos on how to build a gun with readily available materials like metal pipes, rods and matchsticks, he built one for himself and decided to try it out in his backyard. The homemade firearm allegedly backfired and in the process he injured himself in the forehead. The exact details of the events are being investigated by the police at the moment.

Following the injury, the patient never lost consciousness and appeared normal except for the small skin wound in the left forehead and so he decided not to go to the hospital at that moment. He took over the counter medications with which his wound healed with a superficial scar.

He was alright for some time but soon started to experience headache associated with nausea and vomiting. He also had on and off high grade fever with chills and rigor. Over the counter medications gave only temporary relief and over time his symptoms worsened progressively. Only when the medications stopped working was he brought to CRH.

The CT scan and X-ray reported of a metallic foreign body inside the skull. Contrast enhanced CT scan of the brain showed multiple pockets of pus with thickened capsules surrounding the projectile.

There was also significant edema of the surrounding brain causing dangerous mass effect and impending cerebral herniation, all of which can be life threatening. He was planned and prepared for surgery by Dr Pranav, Consultant Neurosurgeon and his team.

A left frontal craniotomy and removal of the projectile was performed. There were multiple encapsulated pockets of thick pus surrounding the projectile. High magnification operating Neurosurgical Microscope was used to carefully explore the brain without injuring the delicate vital structures.

The country made projectile was removed successfully. Pus was drained from the cavities and the abscess capsules were excised using fine dissection. The cavities were then flushed with clean saline. The entry wound on the skull was in the form of a defect about 1.5cm in diameter. This defect was repaired with a titanium mesh plate and screws. The patient made a remarkable recovery from the surgery without any complications and neurological deficits.

Fortune favours the brave but not the foolish. He was fortunate enough to be alive after such a mishap in the first place.  But his decision to avoid medical investigation and treatment nearly cost him his life. Ignorance and fear can often be bigger culprits than the actual problem itself.

Brain abscess is a serious condition and very often can be lethal. Therefore, prompt diagnosis and treatment is mandatory to save life and prevent significant morbidity. When the size of the abscess is large i.e. more than 2-3 cms it has to be excised or aspirated if surgery is contraindicated.