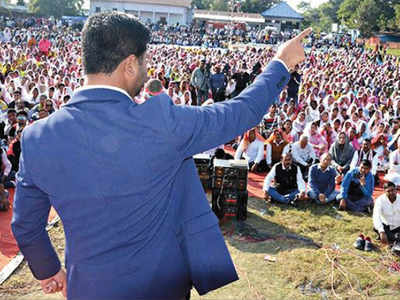 GUWAHATI: The Asom Songrami Mancha, a regional political party of the state on Sunday said that the new political party to be formed shortly under the joint initiative of the All Assam Students Union (AASU) and Assam Jatiyatabadi Yuba-Chatra Parishad (AJYCP) will bring in a paradigm shift in the political dialectics of Assam.

Mancha working president Adip Kumar Phukan said, “We have been waiting for the formation of the AASU-AJYCP’s new regional political party, which will be formally announced shortly in a day or two. The apex students’ body’s new regional party will change the entire political situation of the state. We are sure that the Bodoland People’s Front (BPF), Gana Shakti Party (GSP) and the Autonomous State Demand Committee (ASDC) and other regional forces will join the AASU-AJYCP’s new party once it is formed.”

Mancha, which will also be a stakeholder of the ‘united regional front’, to be formed by the AASU-AJYCP’s new political party, stressed that the regional forces will never accept the Congress-AIUDF alliance in the state. “If we are critical to the ruling BJP for its communal politics, so is with the All India United Democratic Front (AIUDF). Therefore, the emerging regional party will maintain equal distance from both the BJP as well as the Congress-AIUDF alliance,” Phukan said.

Reiterating that the unification of the regional forces is the only way to defeat the BJP in the ensuing assembly elections scheduled for 2021, the Mancha working president said, “We are advancing in a mission mode to bring in all the regional forces under one roof. All the regional political parties, ethnic organisations, indigenous tribal bodies will extend solidarity and support to the AASU-AJYCP’s new party. After the month of November, regional politics will become a dominant factor in the political discourse of the state.”

Phukan also sharply denied Congress’s proposed Mohajut of the opposition and added, “People of Assam will never trust the national parties, may it be the Congress or the BJP. We will stand firm on the united front of the regional political parties. Only the regional front forces can defeat the BJP.”

Notably, the leaders of the KMSS and the AASU-AJYCP have been engaged in a tug of words over the unification of the regional forces in the state.