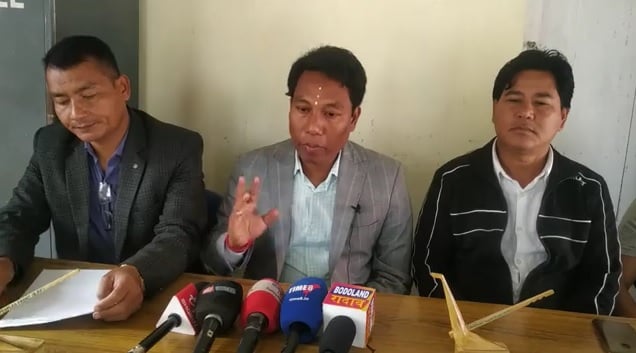 The Central Youth Wing of the Bodoland People’s Front(BPF) came down heavily against the attack on BTC Chief Hagrama Mohilary’s wife Seuli Brahma Mohilary and demanded that the security forces should necessary action against the miscreants.

“We highly condemn the ruthless act. At a time when effective steps are taken under the supervision of Hagrama Mohilary to restore peace in the region some people with vested interest are trying to inflict violence and we cannot accept this” said Somnath Basumatary, General Secretary of Central Youth BPF.

“The concerned authorities should identify the miscreants at the earliest and take necessary steps against them so that such incidents do not occur” he added.

It may be mentioned unidentified masked men on Thursday evening pelted stones on a vehicle where Hagrama Mohilary’s wife Seuli Brahma Mohilary was travelling.

The incident took place while Mrs Mohilary was returning from Ultapani Shiva Temple when it came under attack by reportedly at least 10 miscreants near the Chirang reserve forest under Haltugaon forest division.

She somehow managed to escape unhurt. The vehicle had some minor damage.