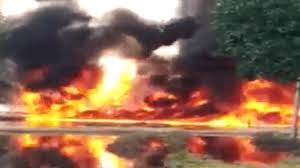 A local source informed Time8 that the incident happened at around 2 pm.

“As usual we saw people working at the blowout site. Suddenly, we could hear the hue and cry at the well site and the staffs were running here and there to rescue the men at work. After a few minutes, an ambulance came to the spot and took the injured men away,” the source said.

According to the source, presently the blowout site has been surrounded by police.

Another source informed Time8 that the injured staffs were immediately admitted at the Aastha Hospital located in upper Assam’s Dibrugarh district.

The PRO of the Oil India Ltd was not available for comment.

Recently, the PRO announced that the Baghan blaze was likely to be fixed within the third week of this month though it missed several given deadlines earlier.