Bonafide citizens, particularly Hindu Bengalis are being targeted in the name of NRC: All BTC Bengali Youth Students' Federation 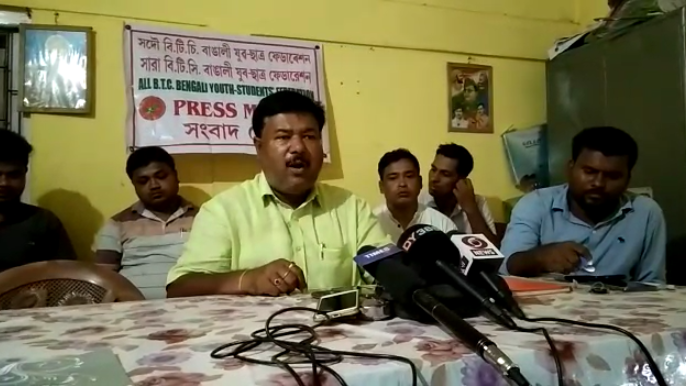 Amid uproar across the state over the exclusion figure, the Udalguri unit of All BTC Bengali Youth Students’ Federation (ABBYSF) came down heavily on the Assam government over the updation of the National Register of Citizens (NRC).

“The people of Assam were waiting to get an error-free NRC list. However, the NRC list which was published on August 31st, 2019 has put an end to the hopes and trust of the common people. The government cannot hand over this faulty NRC list to the people of Assam. We urge the government to stop this drama and restart the updation process in a proper way,” Shyamal Sarkar, chief adviser, ABBYSF

“Over 55,000 government officials were deployed in the NRC updation task under the supervision of the Supreme Court and Assam NRC Coordinator Prateek Hajela. Crores of rupees were invested in the exercise. Yet the people of Assam got a bogus NRC,” added Sarkar while addressing a press conference in Tangla on September 10th, 2019.

The Bengali students’ body also held the government responsible for the suicide incidents post the publication of the NRC in the state.

“It is a matter of shame that a 70-year-old retired school principal of Tangla Model High School was excluded from the final NRC list. Bonafide citizens, particularly Hindu Bengalis are being targeted in the name of NRC. We warn the government of massive mass agitation in the future if Hindu Bengalis are harassed,” he said.

The final NRC list was officially released on August 31st, 2019.  A total of 3,11,21,004 persons were found eligible for inclusion in the list while a total of 19,06,657 people were found ineligible including who did not submit claims.