The city police, being scared by the Covid-19 pandemic, detained the protesters wearing PPE kits from the spot. 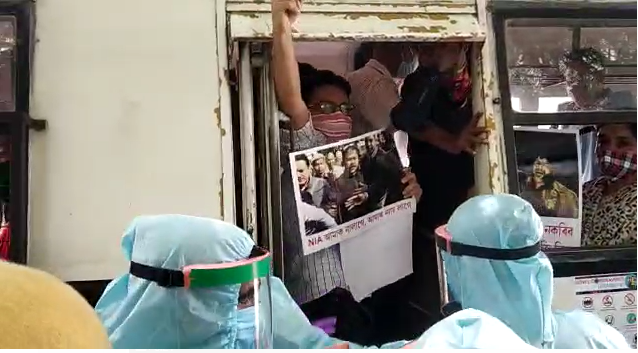 GUWAHATI: The slogan, CAA Aami Namanu, (we won’t accept the citizenship (Amendment) Act), which scares the ruling BJP government on Tuesday came out of the virtual world and revisited the Guwahati street as the Krishak Mukti Sangram Samity (KMSS) staged a protest against CAA at the city’s Chandmari area.

Acting swiftly against the protest, the city police, being scared by the Covid-19 pandemic, detained the protesters wearing PPE kits from the spot. The cops’ wearing of the PPE kits surprised not only the protesters but also amused the commoners gathered around the spot.

Because of the lockdown, imposed since March to contain the spread of the Covid-19 pandemic, the anti-CAA movement had been confined to the digital protests. However, various ethnic organisations and individuals also demonstrated human chain, offered prayers in different parts of the state against CAA and also demanded the immediate release of peasant leader Akhil Gogoi in between the lockdown.

Hence, the agitation staged at Chandmari by the KMSS on Tuesday woke up the state government and indicated the return of a reverberated shouting, ‘CAA Aami Namanau’ after four months brining back with it mass agitation and street protest.

At the Chandmari protest, the KMSS also demanded the state government to unconditionally release peasant leader AKhil Gogoi, one of the key person of the movement against CAA at the earliest.

KMSS president Raju Bora said, “Starting from CAB, we opposed till it became CAA. We are still sticking to our demand, CAA must be scrapped. We will continue demanding to scrap it. Scrapping the draconian CAA is the only path to safeguard the people of Assam.”

The agitation, called on Tuesday by the KMSS was also carried out in different parts of the state.