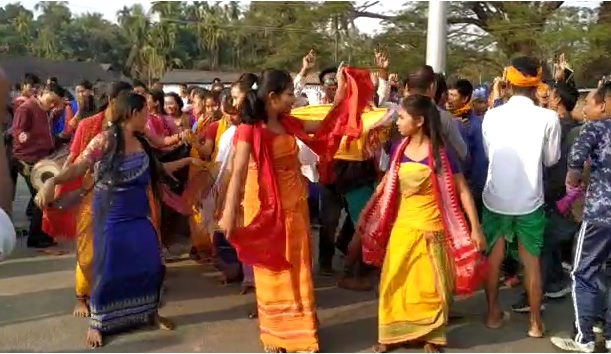 The people of Bodoland are in high spirits and exuberance as celebrations have gripped the region after the Central government signed the historic peace accord with the banned Assam-based Bodo insurgent group NDFB in the national capital today.

Putting all complaints aside the youth came out in large numbers to congratulate and celebrate the signing of the third Bodo Accord which provides more administrative power to the region.

Accepting the peace pact, the Sangathan appealed for peace and said that people should not have a problem with the additional rights bestowed to the region.

It may be mentioned that the tripartite agreement was signed in the presence of Union Home Minister Amit Shah, Assam Chief Minister Sarbananda Sonowal, NEDA Convenor Himanta Biswa Sarma, top leadership of the four factions of the NDFB, Bodoland Territorial Council (BTC) chief Hagrama Mohilary, Joint Secretary in the Home Ministry Satyendra Garg and Assam Chief Secretary Kumar Sanjay Krishna. It is the third Bodo accord to be signed by the Centre and other stakeholders after 27 years.

A financial package of Rs 1500 crore for 3 years will soon be announced by Union Home Minister Amit Shah for the overall development of the Bodoland areas.