Citizenship Bill: Protests Intensify In Assam As Centre All Set To Table CAB In Parliament 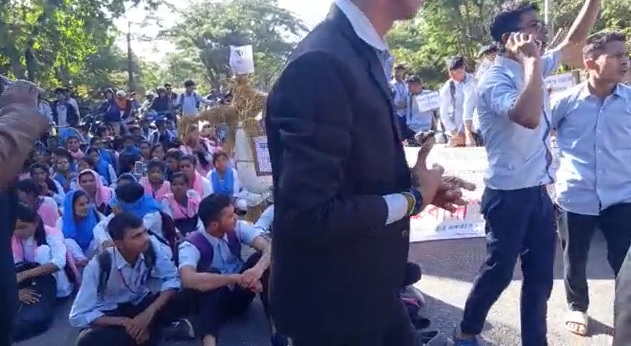 As a part of its on-going movement against the Citizenship Amendment Bill, the All Assam Students’ Union (AASU) and 30 other indigenous organizations launched their 3-day protest against the ‘anti-Assam’ bill on December 4th, 2019.

The student bodies intensified their agitation as the Centre is all set to table the bill at the on-going session of the Parliament.

The protesters burnt effigies of Sarbananda Sonowal, Amit Shah, Himanta Biswa Sarma and took out motorcycle rallies in parts of the state to protest against the bill.

Protesters reiterated that they cannot take the bill which vows on giving Indian citizenship to people based on religion. They said that the bill is unconstitutional and communal.

In Tamulpur the protesters took out a rally along the Rangiya-Bhutan national highway shouting slogans against the Indian and Assam government.

In Lakhimpur, the students of Naoboicha college blocked the National Highway 15 and staged a sit-in demonstration demanding the withdrawal of the bill. The traffic came to a standstill as the students continued to shout anti-CAB slogans.

It may be mentioned that amid massive opposition in Assam and other Northeastern states, the Union Cabinet on December 4th, 2019 cleared the contentious Citizenship Amendment Bill at the meeting presided over by Prime Minister Narendra Modi.

The Bill seeks to grant Indian citizenship to non-Muslims who fled religious persecution from Bangladesh, Pakistan and Afghanistan and entered India before December 31, 2014.