Congress, BJP Members Among 10 Arrested In Gambling Raid In Sonari

Police seized cash amounting to Rs 37,380, 10 mobile phones, two decks of playing cards, a set of 6 dices and a dice mat from the possession of the arrested persons 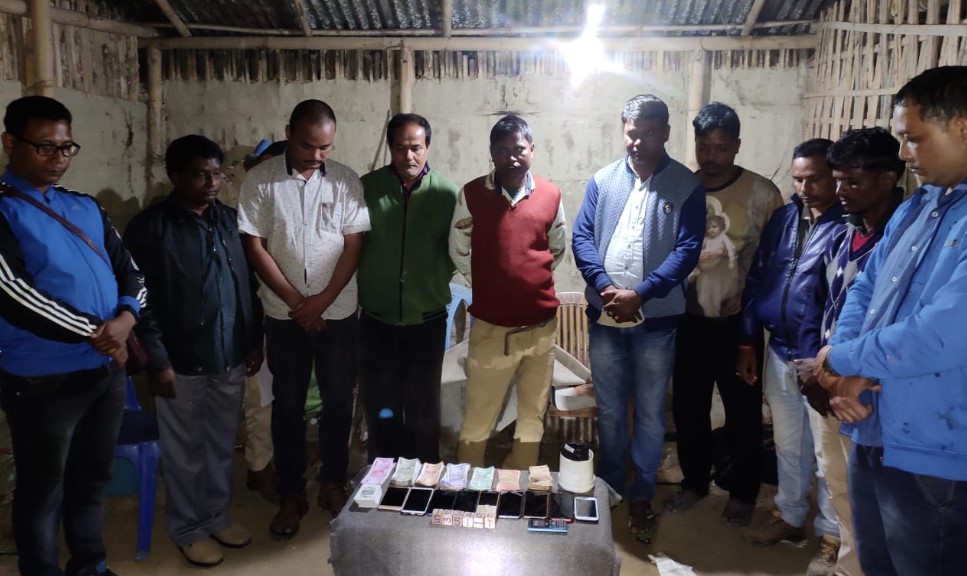 Ten persons, including Congress and Bharatiya Janata Party (BJP) members, teacher and artist were arrested in a gambling raid at Sonari in Charaideo district of Assam.

A team led by Sonari SDPO Tridip Kumbang and Sonari Police Station SI Suman Saha conducted a raid on the intervening hours of November 16th-17th, 2019 and found the arrested persons involved in gambling activities in a small room at old Towkok area, near Nagaland border.

Police seized cash amounting to Rs 37,380, 10 mobile phones, two decks of playing cards, a set of six dices and a dice mat from them.

A case has been registered under relevant sections of law at Namtola Police Station.

Reportedly, the four victims belonged to one family hailing from Jorhat who went for a picnic at Baghmara forest range on the occasion of Republic Day.
Read more

Farmers Protest: One died; Internet cut off in parts of Delhi

Farmers leader have also announced a plan to march on foot to Parliament on February 1, the day Union Budget will be presented.
Read more

BREAKING: Ulfa (I) gives ultimatum to Oil company; Warns of action on Feb 17

Police recovered 51 live ammunitions of AK-47 series rifles, one AK-56 rifle, one AK-47 rifle, three AK magazines and one pistol along with a magazine.
Read more