This is a fight to protect our motherland from illegal foreigners. We will not rest until the citizenship act is scrapped: Students 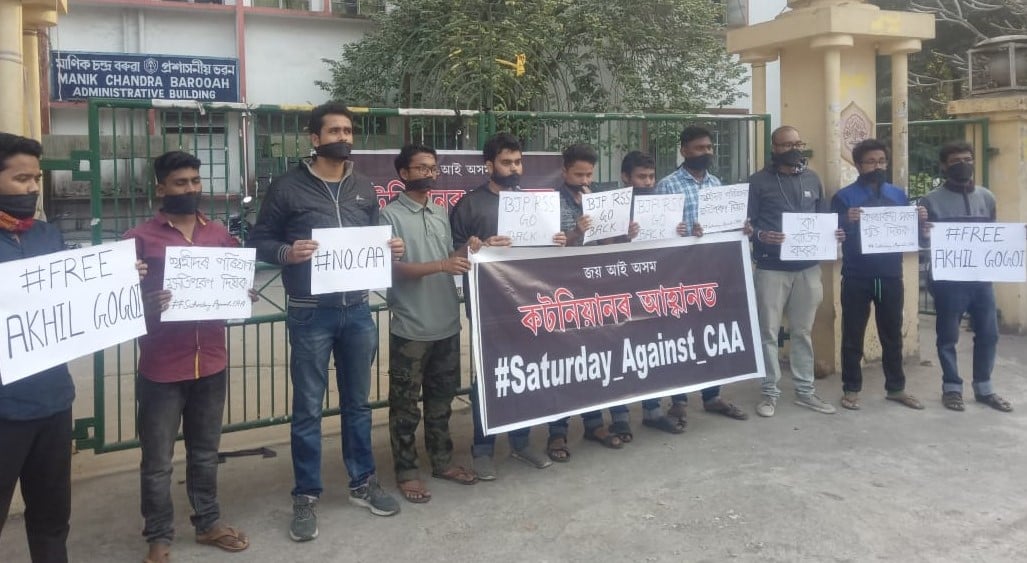 On the lines of Greta Thunberg’s Fridays for Future (FFF) movement, the students of the Cotton University on December 21st, 2019 launched a protest campaign ‘Saturday Against CAA’ to oppose the new Citizenship (Amendment) Act, 2019 (CAA).

The students will attend the regular classes on the weekdays and every Saturday, they will take time off from other activities to protest against the act.

Holding placards, the students staged a protest at the entrance gate of the varsity and demanded the release of Krishak Mukti Sangram Samiti (KMSS) leader Akhil Gogoi from NIA custody.

Speaking to Time8, a student said, “We appeal the Assam Police to release all the persons who were arrested or detained for protesting against the CAA. This is a fight to protect our motherland from illegal foreigners. We will not rest until the citizenship act is scrapped. Every Saturday, we will stage protest the act in a peaceful way. We appeal the people from all walks of life to join us every Saturday.”

Another student said, “We appeal the students of other colleges and universities to take forward the protest against the CAA. After attending their respective classes, the students will join hands to oppose the act on every Saturday. They will meet the local and create awareness regarding the new citizenship act.”

The FFF is an international movement of school students who take time off from class to participate in demonstrations to demand action to prevent further global warming and climate change.

The students’ union and alumni association of Cotton University have decided to ban the entry of members of the ruling BJP, RSS and other organisations supporting the Act into the varsity. The students of Cotton University also staged a protest march in Guwahati demanding the withdrawal of the Citizenship (Amendment) Bill from Parliament.