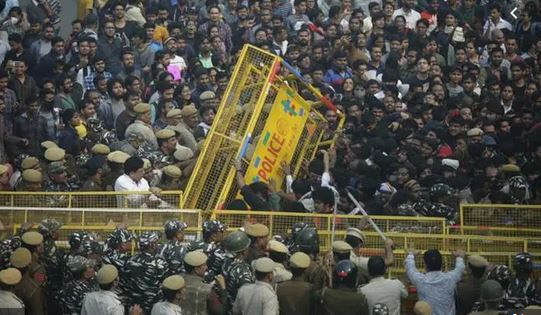 The protest against fee hike in the Jawaharlal Nehru University, one of the foremost educational institutions in India, has remained unfazed with the growing support from different parts of the country. Protestors demanded an affordable education to all.

Hundreds of people including the civilians, JNU alumna and the students staged protest in Delhi on November 23rd, 2019 against the fee hike and demanded the authority to roll back the decision.

In Assam, the Cotton University (CU) and the Tezpur University, while condemning the government’s lackadaisical attitude towards the education sector, extended their support to the protest. They are of the view that it is not the question about only one university rather it is a question on the whole education system. What if the same situation happens in the universities of Assam?

The CU students’ union alleged that the student community in Assam also faces such fascist tendencies of the concerned authorities at times. Government’s alleged attempts to neutralize the voice and role of students by varied means in the social podium have been condemned by the students’ community across the country.

The JNU administration’s rationale for the hike is that the fee has not been revised for 19 years. On the other hand, the university students’ union cited that around 40 per cent of the students come from the lower-income groups and cannot afford the hike.

Education is the most important yet ignored sector in Indian. The Government need to address the issue keeping in mind that education is the constitutional right.