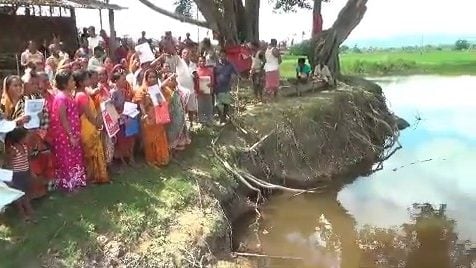 After villagers of Baksa district threatened of mass suicide over exclusion from the final publication of the National Register of Citizens(NRC), a group of villagers from Gohpur area in Assam’s Biswanath district crying foul over the updation process has threatened to end their life by jumping into river.

The irked villagers of Sakura Gaon under Paschim Kalabari Panchayat of Gohpur claimed that around 200 names of ‘genuine’ citizens did not figure in the final NRC list published by the Assam government on August 31st, 2019.

“We settled in Assam and were given land during the Indira Gandhi’s tenure in 1964. Despite producing all the relevant linkage documents, our names did not figure in the NRC”, said an irked villager.

Warning the NRC authorities of dire consequences another villager added, “We will intensify our stir against this injustice and we will collectively jump into the Dubia river if our names are not included at the earliest,”.

Post the publication of the NRC, the villagers have been staging protest, shouting slogans against Assam NRC coordinator, Prateek Hajela.

It may be mentioned that the Assam government on August 31st, 2019 officially released the final NRC list where names of 3,11,21,004 persons were found eligible for inclusion, leaving out 19,06,657 persons including those who did not submit claims.

The exclusion figure displeased many in Assam. The Assam Bharatiya Janata Party (BJP) said it does not trust the updated list and legislation will be brought to safeguard the genuine applicants.

On the other hand, the Assam Police on September 5th, 2019 said it has registered two cases against Hajela and other unidentified officials for alleged anomalies in the final NRC list. All Assam Goriya-Moriya Yuva Chatra Parishad and NGO Assam Public Works have lodged FIR against the State NRC Coordinator in Guwahati and Dibrugarh.