From Zero To Hero: The Saffron Surge In Sikkim 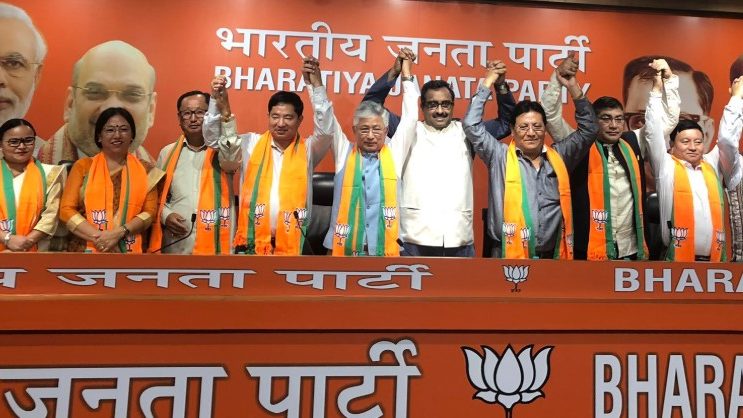 The political scenario, especially in Assam and Sikkim in Northeast India, has turned rousing of late. Joining the BJP of almost a dozen of politicians from the dominant regional political party of Sikkim – Sikkim Democratic Front (SDF) – propelled the saffron party to the main opposition in the state which is conspicuously a significant development. The cliffhanger of changing the jersey to saffron colour made the BJP stronger, who had never been in power in the state. It may be mentioned that the BJP had won just a single seat in the recent state assembly elections.

Remember, two-third or more numbers of legislators of a party can join a new party without violating the anti-defection law. It may be mentioned that the SDF, headed by former Sikkim Chief Minister Pawan Kumar Chamling, waved the flag of regionalism with pride and ruled the state for 25 successive years since 1993.

Notably, it was the first instance where legislators of a regional party in the state have joined a national party. This, in a way, is a major boost to aggressive nationalism politics.

It is quite interesting to see, the MLAs , who joined the BJP, including Dorjee Tshering Lepcha – a key minister in the Chamling government for three times and Ugen Gyasto – a three-term MLA, expressed confidence to work for the development in the state under the leadership of dynamic Prime Minister Narendra Modi and Union Home Minister Amit Shah. Look East policy of the BJP has impressed the leaders to put off the jersey of regionalism, Lepcha admits.

The Modi-wave during the 2014 parliamentary election was different. People had no choice then but to accept the wave of ‘change’ (parivartan). That wave changed its velocity in the 2019 general elections and clinched majority. But interestingly, Modi-wave had no impact on Sikkim politics prior to the recent assembly elections. The change was visible after the assembly polls as 10 SDF MLAs joined the BJP on August 13th, 2019.

On the other hand, Assam has also witnessed a major transformation in politics. Former Rajya Sabha Congress MP from Assam Sanjay Singh to former Rajya Sabha chief whip and senior Assam Congress leader Bhubaneswar Kalita has joined the BJP recently followed by prominent Barak valley leader Gautam Roy and former MP Santiuse Kujur. Now, the Assam BJP is full of leaders imported from Congress, which the BJP recognises as the most corrupted party.