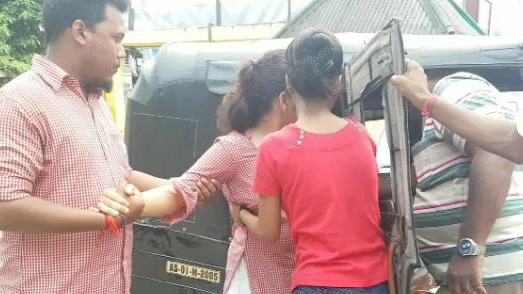 In a horrific incident, two college-going girls jumped off a moving tempo in the Guwahati’s Pandu area after an unidentified ‘masked’ man allegedly tried to inject them with suspected drugs.

The critically injured girls were admitted to the Sanjeevani Hospital. The condition of one of the two girls is said to be critical. The girls are students of Pandu College. The incident occurred near the Pandu Cabin area when the two girls were returning home in Sadilapur after attending classes.

The man boarded the tempo before the girls and was sitting between them. As per reports, one of the girls shouted at the man after she felt something pricking into her body following which the girls jumped off the moving tempo out of fear risking their lives.

An FIR has been lodged at the Jalukbari Police Station. Meanwhile, police have detained the tempo driver, Rajiv Roy. A massive manhunt is on to nab the ‘masked’ man.