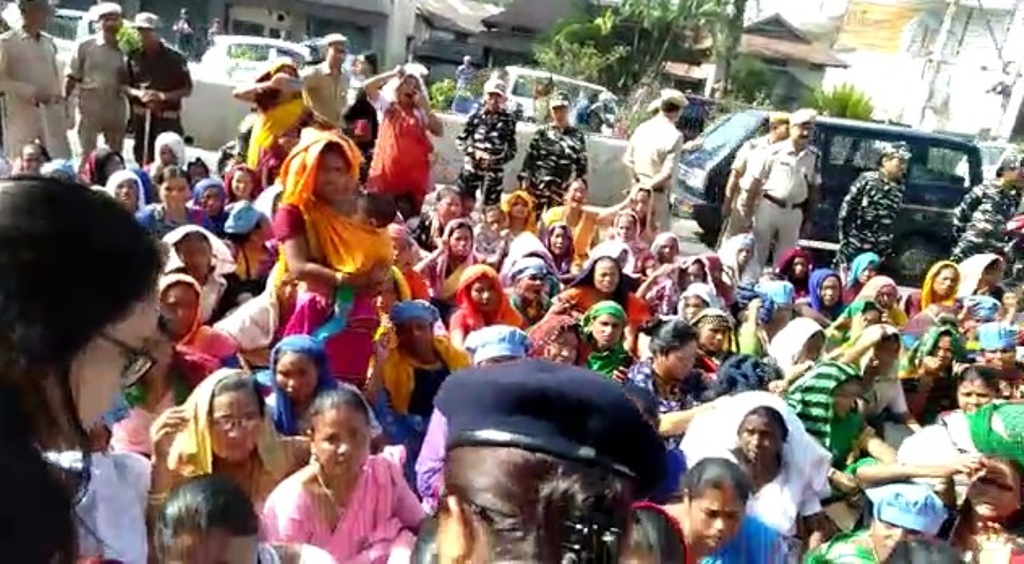 The sit-in demonstration staged along the busy streets of GS Road, Guwahati by the midday meal workers on November 12th, 2019 has been temporarily suspended after the Education Minister Siddhartha Bhattacharya assured to sit for a meeting with the association on November 13th, 2019.

Expressing strong resentment against the government’s decision of handing over the midday meal preparation to NGOs, thousands of workers staged a protest in Guwahati today. The traffic came to a standstill as agitators gheraoed Education Minister’s Guwahati residence. Slogans like ‘we want justice’ and so on rent the air.

“The government should understand the problems of common men. We have been earning livelihood through this scheme. If it is snatched away from us how are we going to feed our children?” said a woman protester breaking into tears.

“If the government is going to turn a deaf ear into our problems then we are going to continue this agitation. We will fight for our rights. We want justice,” added another women agitator.

The agitators, on the other hand, asserted that if the meeting does not have a fruitful outcome and their demands are not met then they would stage a massive protest in front of Janata Bhawan on November 14th, 2019.

It may be mentioned that the state government had given a three years contract to NGOs outside of Assam to prepare, distribute the midday meals across Assam from November 1st, 2019. The decision didn’t go very well in the state as the All Assam Primary and Upper Primary Mid-day Meal Cook and Helper Association has come down heavily on the government. Amid the series of allegations Assam Chief Minister Sarbananda Sonowal on November 9th, 2019 ordered a probe into the alleged irregularities in the supply of mid-day meals to the students.