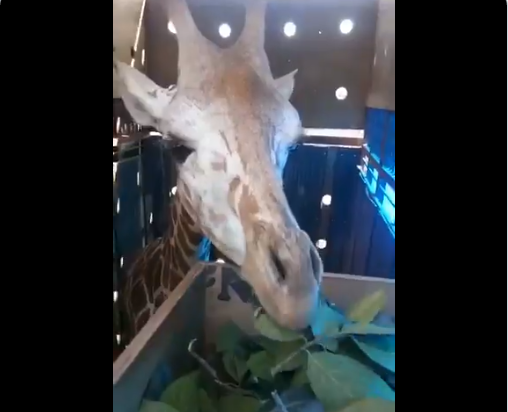 Assam Minister of Excise, Forest and Environment, Parimal Suklabaidya on November 29th, 2019 took to his Twitter to share a cute video where a female giraffe is on his way to the Assam zoo.

In the video, the female giraffe is seen munching on some leaves as she is being transported to Assam zoo from Patna zoo. Suklabaidya wrote in the video caption, “Giraffe is on the way to Assam zoo. It will again be part of the Zoo after a long gap of 8 years. The female giraffe is coming from Patna zoo under an animal exchange programme approved by the Central Zoo Authority, New Delhi.

It may be mentioned, after the death of two female giraffes called Saraswati and Laxmi in the state zoo, this female giraffe will be the third one in the zoo.

In the year 2004, state zoo lost its prized possession, a 27-year-old female giraffe called Saraswati. She was one of the oldest mates in Assam zoo and she was one of the main attractions of the zoo back in the day.

In another instance, in the year 2014, Laxmi another female giraffe died due to age-related ailments.