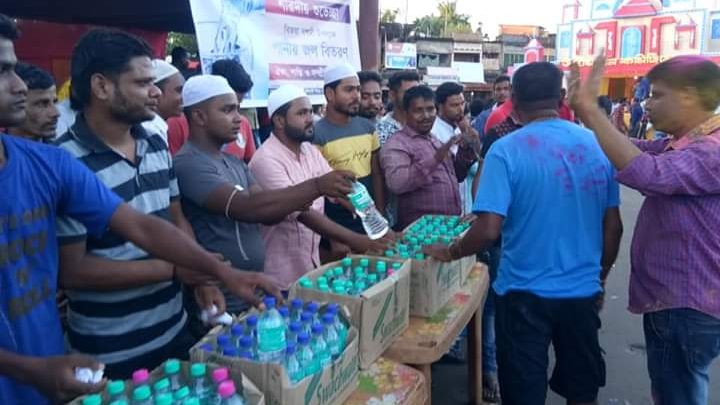 No religion in the world preaches hate, yet there are a section of people who use it to create tensions in the society.

At a time when people are pitted against each other based on their religion in many parts of our country, there are also instances demonstrating communal harmony and brotherhood. One such example of unity in diversity was seen in Cachar district of Assam during the Vijaya Dashami, which was celebrated on October 8th, 2019

Vijaya Dashami is celebrated with processions and Goddess Durga’s idols are immersed in the water bodies. The day celebrates the victory of good over evil.

In Cachar’s Sonai Bazaar area, a group of Muslim men served water bottles to the Hindu devotees as they took out procession to immerse the idols of Durga. The gesture of the Muslim men won the hearts of the local people. Around 5,000 water bottles were distributed among the devotees.

“There is only religion and that is humanity. Seva (service) is the prime responsibility of all the people. We are born to love and not hate each other,” said a local.

Another local added, “The locals were tired and thirst after dancing in the immersion procession. Offering them water is a beautiful example of brotherhood and communal harmony. We appreciate initiatives which endorses friendship and peace.”

On Vijaya Dashami, which marks the end of Durga Puja, the effigies of Ravana and his brothers Meghnad and Kumbhakarana’s are burnt on this day to signify the victory of good over evil. Women play smear each other with vermilion, also known as sindoor khela, before biding adieu to Goddess Durga.