Youth should take sports as a career so that India would be at the top of all the sports competitions in the world: Kiren Rijiju 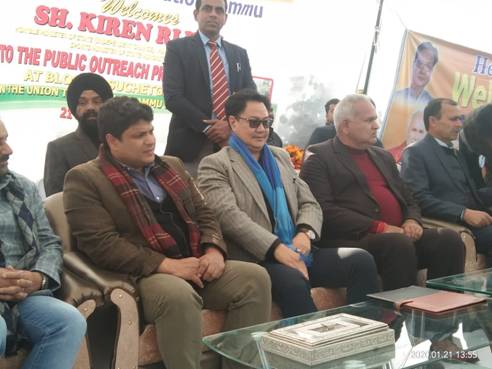 Union Minister of States (I/C) for Youth Affairs & Sports, Kiren Rijiju on January 21st, 2020, said that the youth of Jammu and Kashmir are full of capabilities but require opportunities to prove them. He stated this while addressing the Central Government’s special public outreach programme to disseminate information about the implementation of its policies and programmes for the overall development of Jammu and Kashmir and its people today at Suchetgarh, Jammu.

Emphasising that Article 370 was the real impediment towards the development of the erstwhile state, the Minister said that the youth of J&K have been deprived of sports opportunities in the past or otherwise the Union Territory of J&K would have been a great destination for sports. The minister said that participation in every sport would have been more from J&K if the sports infrastructure had been improved in the past. He said, “The day has come when all the pending approvals related to sports or infrastructure will be cleared by the central government and a new sunrise in the development will be shown to the UT of J&K”.

Rijiju informed that the government has decided to organize winter games at Gulmarg and Srinagar in February, and will also explore opportunities for water sports in the UT. He also said that the youth should take sports as a career so that India would be at the top of all the sports competitions in the world, be it the Olympic Games or other competitions.

Referring to the special task force for Olympics constituted by the Prime Minister Narendra Modi, the Minister said that the target has been set for Tokyo Olympics and Paris Olympics. He said, “We cannot be satisfied now with just two or three medals when this country has 65 per cent youth population. The need of the hour is to bring in new changes in sports, its infrastructure and training.” He also emphasised on the identification of the talent so that world champions could be made in India.

Quoting Mahatma Gandhi, the Minister said that India lives in villages and by this special public outreach programme, the whole cabinet has come to the doorsteps of common masses inside villages and blocks to meet people directly, listen to their grievances and receive their feedback so as to implement the centrally sponsored schemes efficiently. Rijiju reiterated that a new dawn of development would be set in the UT of J&K. He said people now should compare the pace of development before and after the abrogation of Article 370.

Earlier, the Minister inaugurated a CFC building at Chakroi and a Sub Centre at Chak-Mullo being constructed under Border Area Development Cluster Programme. The Minister distributed sports kits to various youth clubs and also inaugurated a Kabaddi and a Volleyball tournament at sports stadium Chakroi.