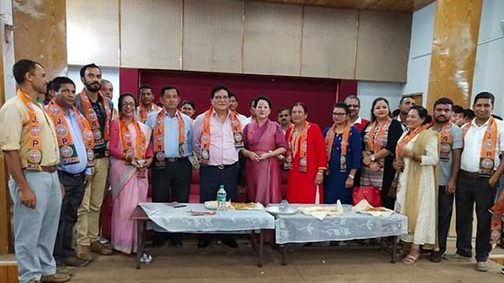 “We took the decision to join the saffron party only for greater interest of the people of the Sikkim. If joining BJP will ensure a bright future of Sikkim then we are ready to face criticism and we are fearless,” Rajkumari Thapa said while addressing the welcome ceremony at the BJP party office at Singtam.

On the other hand, DR Thapa, who also joined the BJP, said that the SDF did not give any importance to their views and words. “Now, I hope that our words will get importance in the BJP,” he added. Tumin Lingee Ugen T Gyatso emphasized the need of a stable government under the eldership of the dynamic Prime Minister Narendra Modi.

Meanwhile, expressing confidence to work for a better Sikkim, DT Lepcha said, “We will not sell Sikkim by joining BJP. We are also Sikkimese. We also love our state. But, now we have to break that stereotype that national party is anti-state but the fact is that we can save our state by joining national party also.” He further appealed the people of the state to join hands in making the future of the state safe and secure.

The state BJP president said that the party has becoming strong in the state. “From now onward, we are largest opposition. So, we will play the role of constructive opposition,” he said.

On August 13th, 2019, a total of 10 SDF MLAs quit the party and joined the saffron party. All the new BJP leaders were accorded with a warm welcome at BJP party office at Singtam.