The video, which the Union minister said was shot in Nagaland, shows a swarm of bees on a man's derriere 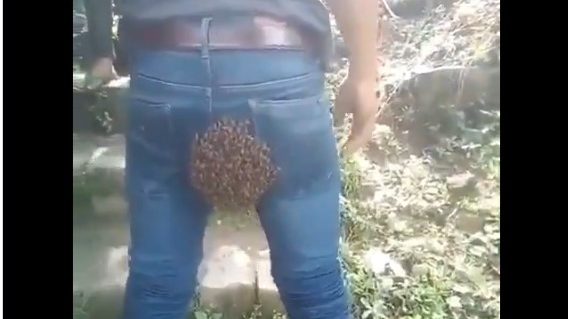 A bizarre video shared by Union Sports Minister Kiren Rijiju of a beehive in the most “inappropriate and unlikely place” has made tweeps go bonkers. Also, the video has left many with weird questions.

The video, which the Union minister said was shot in Nagaland, shows a swarm of bees on a man’s derriere. Luckily, the man was wearing denim jeans. The 40-second video clip shows the man standing calmly on the stairs and laughing as others are jumping around to record it. “This is really a Beehive in an unlikely place. This can happen only in Nagaland!,” tweeted Rijiju.

The clip was first tweeted by Nagaland MLA, Mmhonlumo Kikon who tagged Union Sports Minister among others. The clip was subsequently retweeted by the Union Minister generating a lot of amusement online.

The video shared by Rijiju has garnered a total of 55.7k views, 939 people are talking about it and it has collected 705 retweets. People have come up with all sorts of questions and some hilarious reactions related to the video. Badminton star Jwala Gutta and singer-musician Adan Sami also reacted to it. Look at some of the reactions:

It may be mentioned that Nagas are inherent beekeepers and Nagaland is home to a variety of bee species. In 2007, the government launched Nagaland Beekeeping and Honey Mission to train villagers in the science of beekeeping. The state also celebrates ‘Nagaland Honey Bee Day’ on December 5 every year.