Major Khushboo Kanwar was the all-woman contingent commander of the Assam Rifles, the oldest paramilitary force in the country 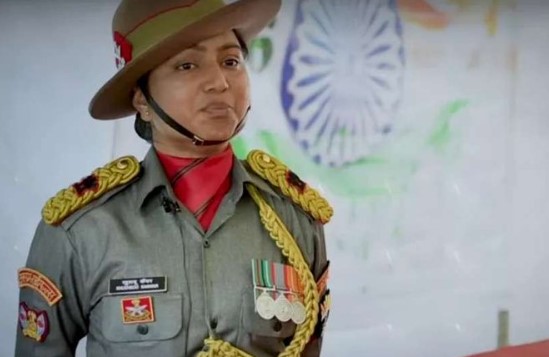 Prime Minister Narendra Modi on October 27th, 2019 dedicated his ‘Mann Ki Baat’ programme to the women of India. He talked about the contribution made by women towards nation-building.

During his address, Modi talked about women who have a beacon of inspiration and motivation for the rest of the country. He mentioned active Twitter user Geetika Swami who had said that for her Major Khushboo Kanwar is ‘Bharat Ki Laxmi’.

For the first time ever in the history, an all-woman contingent of the Assam Rifles walked down the Rajpath during the 70th Republic Day parade this year. The contingent was led by Major Khushboo.

Major Khushboo was the all-woman contingent commander of the Assam Rifles, the oldest paramilitary force in the country, in the Republic Day parade. She is a daughter of a bus conductor and hails from Jaipur, Rajasthan. She was inducted into the Indian Army in 2012.

“I am the daughter of a bus conductor and if I can accomplish this, then any girl can fulfil her dreams, achieve her goals,” Major Khushboo told newsmen.

Prime Minister Modi further shared several inspiring stories of women and their achievements. Hailing the nari shakti, Modi said in his address, “Our daughters are our pride and from our daughters, only our society draws its strength and hope for future.” Modi also kick-started the ‘Bharat ki Lakshmi’ campaign to acknowledge the contributions of the women in our society.