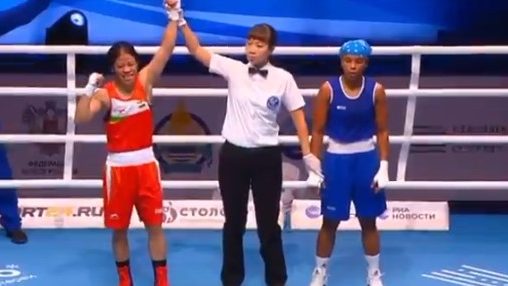 Six-time World Champion Mary Kom on October 10th, 2019 became the most successful boxer in the history of the Women’s World Championship by securing an unprecedented eighth medal by reaching the semi-final at Ulan-Ude in Russia.

Kom assured herself of at least a bronze medal in the ongoing World Championship after booking her place in the semi-finals of the 51kg category event. She defeated Colombia’s Valencia Victoria, fetching a unanimous 5-0 verdict to make the last-eight stage.

She marched into the quarterfinals on October 8th, 2019. The London Olympic Bronze medalist had to work hard initially as she went on to defeat Thailand’s Jutumas Jitpong 5-0 after receiving a first-round bye.

Kom will now face Busenaz Cakiroglu of Turkey on October 12th, 2019. Union Sports Minister Kiren Rijiju also congratulated Kom. “You are a legend and the only boxer in the World to win 8 medals in World Boxing Championships. My best wishes to you for the Semi-Finals,” Rijiju tweeted.