The fire reportedly broke out due to a cylinder explosion at a restaurant near HB Road, Fancy Bazaar 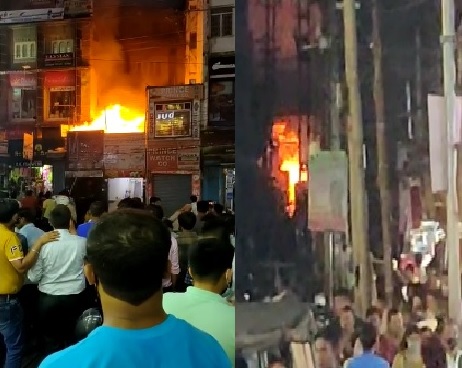 Guwahati: In the midst of Bohag Bihu celebrations, a major fire broke out in Guwahati’s Fancy Bazaar area in the evening hours on Friday.

The fire reportedly broke out due to a cylinder explosion at a restaurant near HB Road, Fancy Bazaar.

It is noteworthy to mention that the restaurant is located in one of the poshest zones in the city of Guwahati.

Meanwhile, two fire tenders rushed to the spot and brought down the situation under control after 2 hours of the fire incident.

Sources informed that the fire tenders along with local people put in their best efforts to extinguish the blaze.

It is feared that the fire may have completely engulfed the restaurant and damaged other nearby business establishments.

No casualties were reported so far during the fire incident.