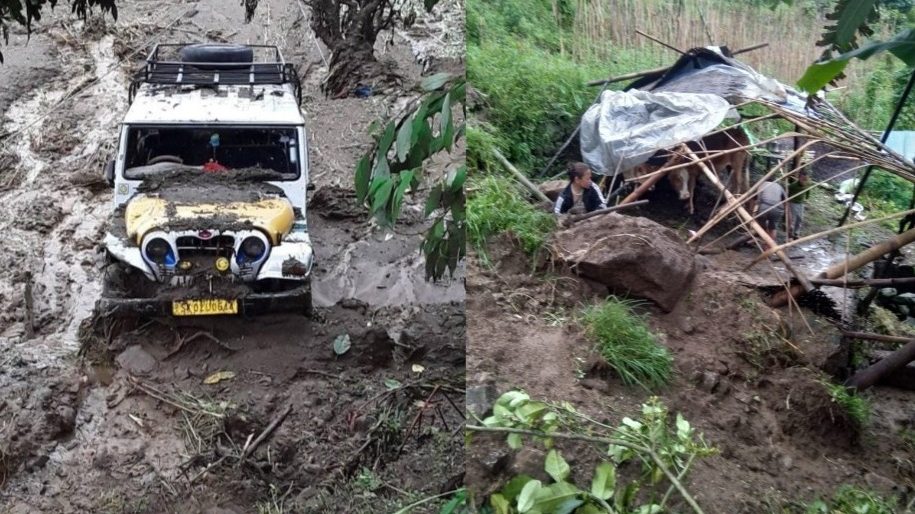 Continuous downpour over the past few days has triggered landslide at Tsong village near Yuksam snapping surface communications. Yuksom is a historical town in Geyzing subdivision of West Sikkim district of the state.

As per reports, as many as twelve houses and animal sheds were damaged. However, no casualty has been reported so far. A lady sustained severe injuries and is under treatment at Yuksam PHC. A bridge at Famrong falls that connects Tashiding with Pelling has been washed out completely by the flash flood.

The residents of Tsong and Mantabung village above Famrong falls have been evacuated and given shelter at nearby houses and hotels considering the inclement weather conditions. Some households have lost their domestic animals to furious Famrong Khola. Yuksam Area is in High Alert because of heavy rainfall. Domestic animals including sheep, goats have been swept away.

Restoration work is being carried out by the administration, police, forest personnel along with NDRF and local villagers. The officials informed that complete damage assessment could not be done due to nightfall and heavy rains.

The area was surveyed on September 17th, 2019 morning to plan out necessary action and help to be extended. Chief Minister Prem Singh Tamang is personally monitoring the restoration work, officials said.

Relief and rescue teams consisting of QRTs, KNP, NDRF, additional police force have been deployed at the Tsong village. SSB personnel were also being rushed for the operation in the landslide-hit area.