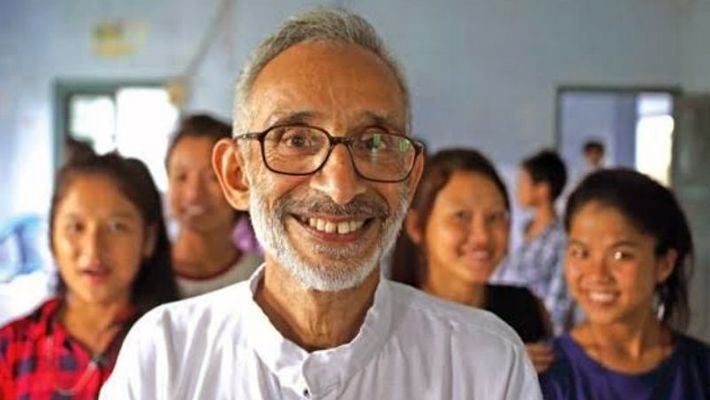 A Malayali septuagenarian known as ‘Uncle Moosa’ from Arunachal Pradesh has been conferred the fourth highest civilian awards on the occasion of 71st Republic Day celebrations.

Born in Kerala, Sathyanarayan Mundayoor quit his government job as a Revenue Officer in Mumbai in 1979 and shifted to Lohit in Arunachal Pradesh. After quitting his job in 1979, he got a chance to work with the Vivekananda Kendra Vidyalaya which was then busy in spreading its roots in the Northeast.

He worked as an education officer for Vivekananda Kendra Vidyalaya till 1996. During that time, he started his mission to influence the youths with his ideas. Later, he decided to branch out from the confines of formal education. In a bid to stimulate the reading habits of children and allow them to discover the power of imagination, Uncle Moosa started organising book exhibitions in the remote areas.

In 2007, in collaboration with the Association of Writers and Illustrators for Children (AWIC) and the Vivekananda Trust (of which he is a member), a library for the children was set up part of the Lohit Youth Library Movement in Tezu. This library was named the Bamboosa Library.

A total of 13 such libraries can be found in off-the-beaten-path places like Wakro, Chongkham, Anjaw, and Lathao with over 10,000 books each and starting home library movement in the state.

Arunachal Pradesh Chief Minister Pema Khandu expressed his happiness at the achievement of Sathyanarayan Mundayoor and said the latter is a “true gem” of the state.

“I am deeply happy that Shri Sathyanarayan Mundayoor Ji is being conferred with Padma Shri in the field of Social Work (Affordable Education). Congratulations to the true gem of Arunachal who has dedicated his entire life for upliftment of education in Arunachal,” Khandu said.

Padma Awards – one of the highest civilian Awards of the country, are conferred in three categories, namely, Padma Vibhushan, Padma Bhushan and Padma Shri. The Awards are given in various disciplines/ fields of activities, viz.- art, social work, public affairs, science and engineering, trade and industry, medicine, literature and education, sports, civil service, etc. ‘Padma Vibhushan’ is awarded for exceptional and distinguished service; ‘Padma Bhushan’ for distinguished service of high order and ‘Padma Shri’ for distinguished service in any field. The awards are announced on the occasion of Republic Day every year.

These awards are conferred by the President of India at ceremonial functions which are held at Rashtrapati Bhawan usually around March/ April every year. This year the President has approved conferment of 141 Padma Awards including four duo cases (in a duo case, the Award is counted as one) as per list below. The list comprises of seven Padma Vibhushan, 16 Padma Bhushan and 118 Padma Shri Awards. 33 of the awardees are women and the list also includes 18 persons from the category of Foreigners/NRI/PIO/OCI and 12 Posthumous awardees.

Fifteen noted personalities from the Northeast region have been conferred the coveted Padma awards this year.