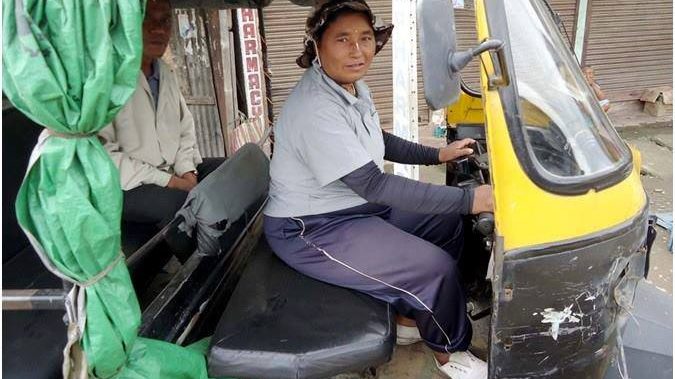 In the state of Manipur, when Laibi Oinam started driving a second-hand auto-rickshaw a decade ago to support her ailing husband and growing sons, little did she know that her struggles as a woman auto-rickshaw driver in the state will inspire a filmmaker to make a documentary.

The documentary named Autodriver made by film director Meena Longjam is barely a 30 minutes show but it has the three years of Oinam’s life poured out in it and how she became acquainted with an auto-rickshaw which was predominantly driven by the male section of the society.Advertisement

Oinam in her initial days of driving received a lot of backlashes from the people of her own home state. But, her life took a different course in the year 2015 when her struggle was finally noticed by Meena. Now in her 50s, Oinam owns a new auto-rickshaw and her younger son is inching closer to his football dream.

Also, the society which used to look down at her sees her with respectful eyes and encourage her to carry forward her work. Laibi says that when she started to drive an auto-rickshaw, she didn’t take it up to challenge stereotypes but to make their ends meet which she was unable to do so with her job in a brick kiln.

“The deteriorating health of my husband and my sons’ education demanded more money, so I collected money through chit fund and bought a second-hand auto. First, I rented it out to others but we didn’t get much money out of it. Meanwhile, my husband got unwell, so I decided to start driving,” said Laibi told IANS.

“Initially I used to wear my phanek (traditional wear of Manipuri women). Later, I changed to pants as people often refused to take rides because of my gender and outfit,” she added.

The documentary went on to win the best social issue film in the non-feature category at the 63rd edition of National Film Awards. Filmmaker Meena who shared her experience with IANS had said that the Oinam’s journey is an emotional one as she does all her household chores and then heads out to earn a living for her family.

Meena has also revealed that the economic condition of Laibi has not dampened her big dreams as she still dreams for her elder son to become an IAS officer who dropped out of Sainik school due to their financial conditions and her younger one to be a footballer.

Presently, Oinam is leading a respectful life in Imphal and her elder son will soon complete his graduation and her younger son is studying a football academy in Chandigarh.