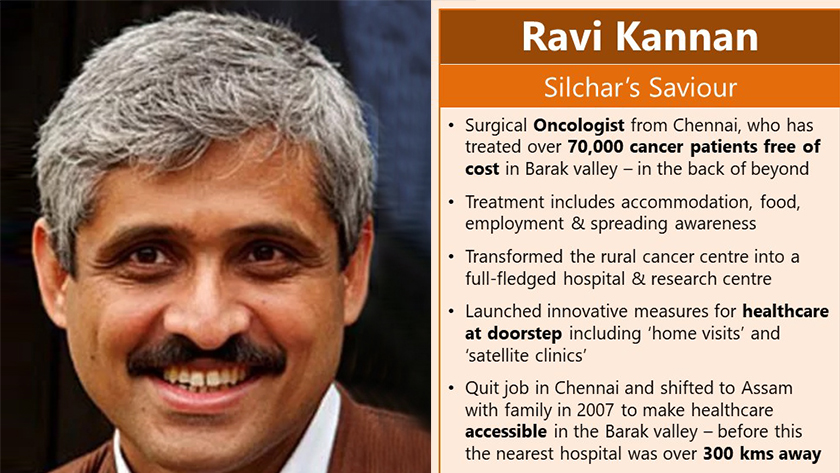 The surgery oncologist Dr Ravi Kannan has unequivocally set an example of humanity in this era of the hectic life where people rarely have time to serve for free. President Ram Nath Kovind’s approval for the Padma Shri award to this saviour is not only respect to Kannan but also justice to mankind.

Till 2007, the Barak valley in Assam was fighting against the Cancer due to unavailability of treatment. Patients were used to referring to Guwahati, which falls at 334 km distance by road and 380 km distance by rails from Silchar.

Thereafter, Kannan packed his luggage and shifted to Silchar with his family from Chennai and dedicated his life to ensure free healthcare to the poor in the valley in Assam.

Till then, the Cachar Cancer Hospital was reeling under a number of problems including financial issues and lack of infrastructure. Even, the first radiation unit was installed 14 years after the hospital was founded while the first qualified nurse came on board in 2008.

Dr Kannan’s joining in the hospital was a blessing of the almighty for the people of the valley. He treated over 70,000 cancer patients free of cost. The treatment includes accommodation, food, employment and spreading awareness.

Initially, people did not visit the hospital thinking that the treatment would cost high. Over 60 per cent of the patients had a low income as most of the families depend on a daily wage.

Hence, Dr Kannan and his team discovered a way to get the patients to come in. They started employing the attendants of the patients. These attendants help out in the garden or do other small tasks. Initially, they were paid Rs 30 but now they get about Rs 100 per day for their work.

The hospital, now, is generating employment as well as providing free treatment to cancer patients. This is indeed an inspiring story.

Kannan, who is the director of the hospital, and his incredible team have changed the healthcare scenario in the region over the years. The strength of 23 staff members has been raised to 200 while 25 beds to 100.

This 28-year-old hospital, which got the crusader against the caner, runs on the funds it receives from various organisations and individuals. In 2011, the Indo-American Cancer Association helped in establishing the Department of Pain and Palliative Care in the hospital. A Department of Dental Surgery and an ICU were installed from the contributions made by individuals and NGOs. The hospital also raises crowdfunding to provide treatment to the patients.

Rakesh Kumar received the “Best State Award” on behalf of the state government which included a cash reward, a certificate, one Shawl and a Memento
Read more

The minister also extended greetings to the children and urged them to work hard in life, while distributing fruits and gifts among them.
Read more